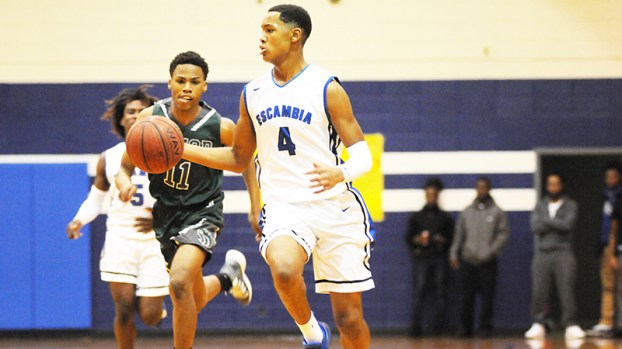 Escambia County’s Lue Williams is in a prestigious club.

The senior guard scored his 1,000th career point Monday night in the Blue Devils’ 68-40 victory over Flomaton at home.

Williams, who had 14 points in the game, scored a 3-pointer early, and got the milestone point on a free throw.

With the win, ECHS improves to 8-1 on the season, and travels to play in the Southeastern Holiday Invitational in Northview starting on Thursday. Other teams playing in the tournament include Dothan, Northview (Ala.), Pike County, Daphne and Central Phenix City.

Jackson said his team is forming good chemistry, which translates on the court.

“We’re passing the ball around,” he said. “Our defense is playing well.”

Against FHS last Thursday, Demetrion Barnes had 15, and JP Pattterson chipped in 11.

Williams led with 23 points against MCHS on Dec. 14; A. Patterson chipped in with 11 points; J. Patterson had eight points; and Peoples had 10 points.