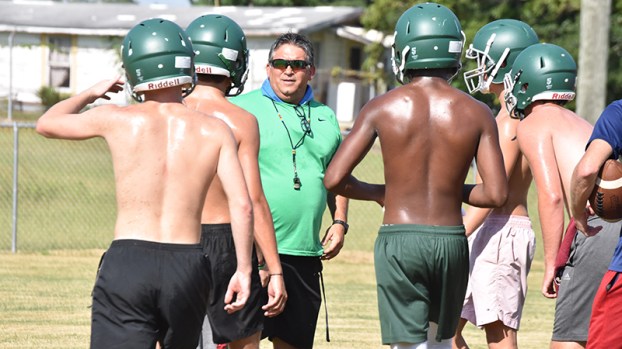 From the first moment Scott Mason laid eyes on the talent at Escambia County, he knew he wanted to be the Blue Devils’ head football coach.

Mason was hired by the Escambia County School System’s board of education during a meeting on Dec. 20, to be the next coach at ECHS. He replaces Rico Jackson, who was hired recently as the head coach at Murphy High School in Mobile.

Mason said he became attracted to the job at ECHS during a game he helped his father coach while at FA.

FA won a close battle, but Mason said he walked off the field thinking what it would be like to coach that level of talent in Atmore.

“I’ve always wanted the job,” he said. “The last couple times didn’t work out for us.

“In the back of my mind, I felt like the good Lord wanted me to be there. We applied and it worked out to where I was able to come. I just think it’s a sleeping giant. By the look at the kids and the facilities, to me, it’s close to home for me and I’m able to go back and forth to my parents. It’s just perfect.”

Mason comes to ECHS after two seasons at Florala High School. He had stints as an offensive coordinator at Faith Academy under his father, Bubba, in the early 1990s. He then got out of coaching for a bit and came back to the job he loves in 2004 as an OC at Citronelle, his hometown. Then, he took the head coaching job at Fruitdale from 2007-09, helped start the football program at Saraland in 2010 and had further stints at Vigor and Citronelle before being hired at Florala.

In his two years at FHS, he compiled a 8-12 record as the head coach of the Wildcats.

“I’m going to run my own version of the spread system,” he said. “We call it thunder and lightning. It’s kind of a combination of the air raid and wing.”

Mason said his offensive scheme is loose and fast.

“Over the last two years at Florala, my quarterback made state record books two years in a row,” he said. “We led our region in scoring through week 10. We play very fast, and the kids like to call it basketball on grass. We love to score points.”

Mason said he’s seen success through his system, and will make any adjustments necessary based on what type of quarterback is leading the charge.

Growing up in a football family, Mason said he learned a lot from his father.

“He was a players’ coach,” Mason said. “He was hard nosed and taught me the blocking and tackling aspects of the game.

“That’s still how you win,” he said. “No matter how good you are on offense, you still have to block and tackle. My dad is a big fundamentals guy.”

Mason said he still considers himself a student of the game, adding that he has used coaching advice from Leach and Mumme, along with the Tony Franklin System as his base.

“We try to stay on the cutting edge. That really helps,” he said. “The things teams are talking about now, we were doing 10 years ago.”

Mason and his wife, Nicole, are both Choctaw Indian, and the couple have five children.

“I’m very excited and appreciate the opportunity,” he said. “I hope to get around the Atmore area, and get out to meet people and get everybody excited about the upcoming season. I’m very accessible. It’s everybody’s program.”