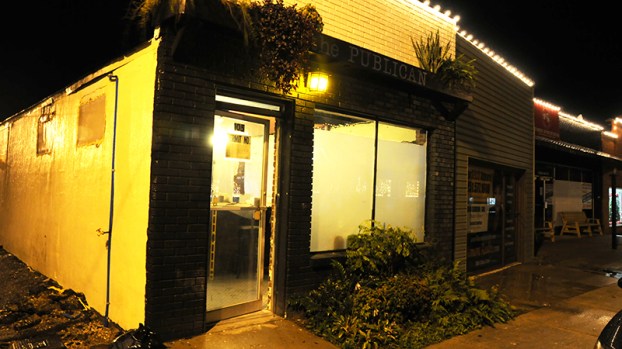 Step by step, piece-by-piece, The Publican is coming together.

Atmore’s newest pub located on West Ridgeley Street, right behind the Atmore Area Chamber of Commerce, has been a vision of Co-Owners David Strawbridge and Delmar Weaver.

Strawbridge said they felt like Atmore needed a pub.

“I’ve always wanted to do it, Strawbridge said. “I’m a fan of the atmosphere. No one was really talking about anything moving forward.

“It’s always just been in the back burner of my brain,” he said. “I just wanted to bring that to Atmore. I felt like as my experience in beverage in sales and management, and my partner’s (Weaver) experience in business and bar, we could do this better than anyone else could.”

Weaver has similar thoughts on why The Publican is needed in Atmore.

“This could maybe be a place to go that’s not what they’ve had typically in the past,” Weaver said. “I don’t know if you’ve seen some of the things on Facebook. David has put a lot up there (on his page) and the response has been phenomenal. The people have asked for it.”

Located in a former building that housed a barbershop on Ridgeley Street, The Publican will feature a red oak bar with a brass bar and copper counter top. Behind the two serving stations, shelving units will house the pub’s spirits.

Weaver said Rusty Miller has been the lead designer of the pub.

Along the wall of The Publican, visitors will notice a decorative wall with circular pieces of wood attached.

Strawbridge said the plan is for the pub to hold two stations — one for draft beer and the other for wine.

“We want each station to mimic each other so that wine, beer and spirits are available within a step or reach of the tenders,” Strawbridge said. “On one end, it’ll be exposed to draft beer and the other end to wine selection. We want to do about eight heads on draft. Guinness is definitely going to be on draft. To me, that’s the pinnacle of a pub.”

Weaver, who owns Native Gaming Services and was a former bar owner in Pensacola, Fla., said they hope to have craft beer selections from Fairhope Brewing Co. and Pensacola (Fla.) Bay Brewing.

Weaver added that the pub will hold all the domestics, or favorites, of customers.

On serving food, Strawbridge said and Weaver said they will start out with snacks, like popcorn and nuts, but hope to expand the appetizer menu in the future.

“We’re going to have at least four to five appetizers,” Strawbridge said. “We won’t be competitive to what we have here in Atmore. I’d like to introduce local pub fair, true fish and chips (white fish like cod and tartar) and malt vinegars to accentuate it, with fries as well. That’s something I’d like to do and serve it in newspapers like they do in the (United Kingdom).”

As far as an open date, Strawbridge and Weaver are planning on having a soft opening at the tail end of this month (January). They said they’re planning on opening The Publican at that time as well.

Hours of operation haven’t been determined, but the owners said that the pub will  at about 3 p.m., and won’t be open past 11 p.m. or midnight.

Central Farm Supply of Atmore began its 35th year in business on Jan. 2. Manager Doug Smith, who has been... read more