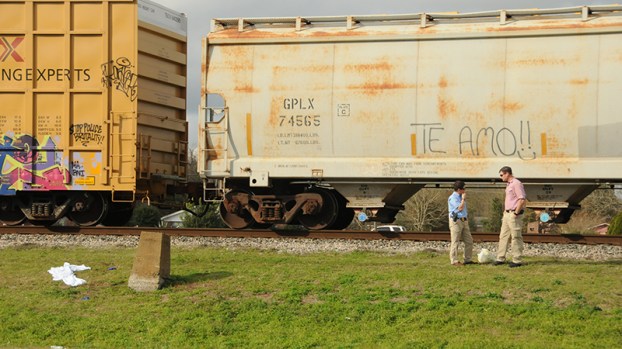 Atmore man killed after being struck by train

At Atmore man was killed after being struck by a train on Wednesday at the railroad crossing at Martin Luther King Avenue, according to police officials.

Atmore Police Sgt. Robby Williams said in a release that a 911 caller reported to APD that a train struck a male pedestrian shortly after 1 p.m.

“Upon arrival, Atmore police observed a male identified as 40-year-old Eric Edwards Smith, of Atmore, laying face down on the grass adjacent to the railroad track,” Williams said in a release. “The body was immediately checked for vital signs, of which there were none.”

Williams said ASAP Ambulance crews were already on scene, and resuscitation procedures were administered, but were unsuccessful. Smith was pronounced deceased at the scene.

Williams said according to witness statements and evidence observed at the scene, Smith was walking or standing on the track at the crossing at MLK Avenue.

“The crossing arms were down, the signal lights were flashing and the west-bound CSX train sounded the horn numerous times, but Smith did not get out of the path of the oncoming train,” he said in the release.

The APD, along with CSX investigators, are conducting the ongoing investigation.

The dream will only stay alive if something is being done. That’s the message Beatrice “Bea” Forniss relayed to a... read more