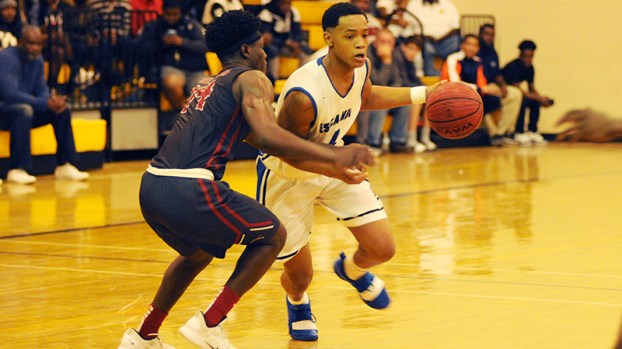 MOBILE — Lue Williams scored 22 points and Escambia County held on late to beat UMS-Wright 48-45 tonight in the semifinals of the Class 4A, Area 1 tournament at Williamson.

A four-period effort by the No. 8 Blue Devils helped the Atmore team advance to the area tournament championship, which is slated for Saturday at 7 p.m. WHS defeated W.S. Neal in the other side of the semifinals. Additionally, the Blue Devils also earned a trip to the sub-regional on Feb. 12.

ECHS basketball coach Rodney Jackson said the game ended up as a battle of wills.

“We executed down the stretch,” Jackson said. “We played hard all four quarters. We played hard, and to the victors goes the spoils.”

The Blue Devils (18-6) made a statement early in the game, going up 12-5 after Williams almost completed a three-point play. Williams later got a steal and a bucket to give Atmore a 18-10 going into the second period.

UMS bounced back in the second as the Bulldogs went on a 7-0 run in the first 4:31 of the period after a Virgil Peoples drive to the lane.

However, ECHS came back a little with the help of Malik Brown and Williams.

UMS-Wright’s Martin Montgomery drained a 3 with 40 seconds left in the first half to send the Bulldogs to the locker room with a 24-23 lead at the break.

Playing aggressive was the big key for ECHS as the Blue Devils switched line ups during, Jackson said.

“In the third and fourth quarter, my seniors — Lue, Jordaun Patterson, Brown, (Deondre) Freeman — all my seniors stepped up,” the coach said.

Williams started the period with a bucket, and UMS-Wright’s Robert Bonham answered with a drive of his own. Montgomery then drained a pair of free throws to keep the Bulldogs in the game.

Allen Patterson answered with a 3-pointer, and Freeman grabbed a monster rebound, which Williams finished for a 32-28 lead a short time later.

By this point, ECHS hadn’t used any of its timeouts.

Jackson said he always waits until the second half to utilize the breaks. He ended up using three of his timeouts within a 3-minute period in the fourth.

Demetrion Barnes dished in a 3 to start the fourth, Bonham answered with a 3-pointer of his own and Brown drained a pair of free shots with 3:26 left. Shortly afterward, ECHS used its second time out, and another at the 2:00 mark.

Bonham then got a steal and converted a 3-point play, and Williams made the front-end of a 1-and-1 with 1:46 left.