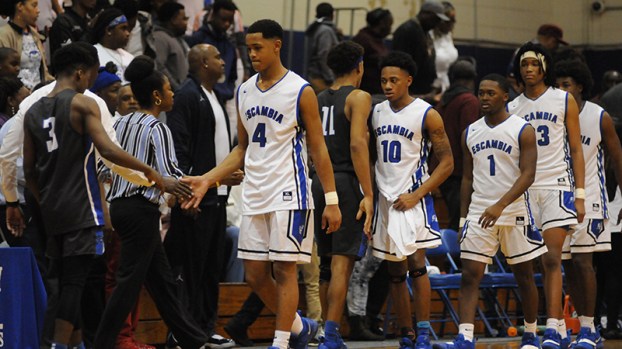 One can’t hide a broken heart.

Escambia County lost 54-47 to a scrappy Clarke County team tonight in a Class 4A sub regional game at the Cornell Torrence Gymnasium in Atmore.

The Blue Devils trailed the majority of the second half against a Bulldog squad that seemed to have an answer for every enigma ECHS threw at them.

“Clarke County is a really good team,” ECHS coach Rodney Jackson said after the game. “They’re a scrappy team. We played the third and fourth period — we played hard.”

Jackson said the team was trying hard to get a lead because as previous games have dictated, the Blue Devils would’ve run away with the contest.

“Clarke County stuck to their guns, and they played hard,” he said.

Trailing 49-47 with 6.1 seconds left in the game, ECHS called a timeout to talk about the play.

On the inbound, senior standout Lue Williams got the ball and drove right, but lost the ball due to a CC defender. In the melee, CC’s Gemanuel Jackson was fouled, and picked up a technical foul call for four chances at the line. He made three to essentially ice the game with 2 seconds left.

Jackson said the plan was a drive and kick play in the last possession.

“Lue got fouled, and the referee didn’t call the foul,” he said. “Clarke County got the ball, and it was over.”

Quite a lot happened in the fourth period as the Blue Devils entered the decider trailing 39-33.

Williams nailed a 3 to cut it to five, and later got a block-foul on the defensive end. Jabari Gregory made his two and CC led 43-36.

Jordaun Patterson then drained two free shots a short time later, and Malik Brown answered with a drive to the basket with 3:35 to go. ECHS trailed 45-40.

Williams helped his team cut it to two with a rebound, which was followed up by two free throws.

However, the Bulldogs answered with a Markel Cheeseboro bucket off an inbound pass.

The Blue Devils managed to get the ball back 1.2 seconds later.

Earlier in the third period, Virgil Peoples got a bucket, and Allen Patterson made a long jumper to cut it to 29-26.

Quandre Burroughs later made the back-end of a pair to make it 35-30 with 2:43 left in the third for CC.

Deante Clark made a one-and-one to get it to 39-33 at the end of the third.
Jackson said the shots needed didn’t fall for ECHS in the second half.

“Clarke County was a better team tonight,” he said. “Nine times out of 10, we’re the better team. Just one game, and they were better.”

Gregory and Clark led CC with 12 points each.