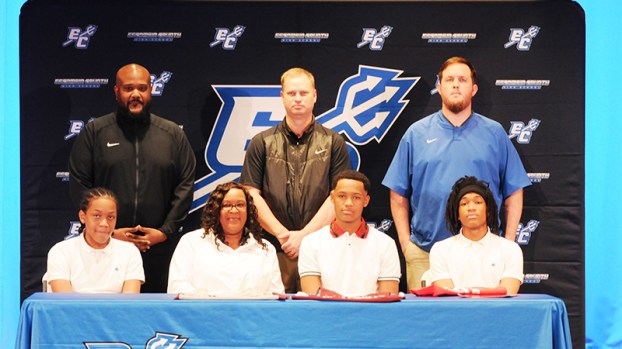 Williams averaged 17.4 points and 6.9 rebounds per game during his senior season, and was selected to the Alabama Sports Writers Association Class 4A All-State second team.

Surrounded by his family and in front of the school’s banner in the auditorium, Williams put pen to paper to make it official.

He said he chose CACC because it’s close to home. He’ll be staying at the Bay Minette campus.

“It’s a good fit for me,” Williams said. “I like their basketball team. They made it pretty far. I like the school overall.”

CACC coach Robby Robertson said Williams’ personality is going to be a good fit for the team.

“The No. 1 thing that we like about him is the type of person he is,” Robertson said. “He’s a high character young man, and he does what he’s supposed to do in the classroom.”

Robertson said Williams is great on the court as well.

“We’re losing two guards that were averaging 30 points for us, and a player of the year,” he said. “We feel like he can step right in for us.”

Robertson said Williams will need to get stronger, which shouldn’t be a problem considering the type of person his newest signee is.

“One of the things that really attracted us was his work ethic,” he said. “We feel like he’ll do everything we need him to do to improve his body and his shot.”

T.R. Miller hit a walk-off to edge Northview 7-6 on March 18 in Brewton. The Chiefs were led by Nick... read more