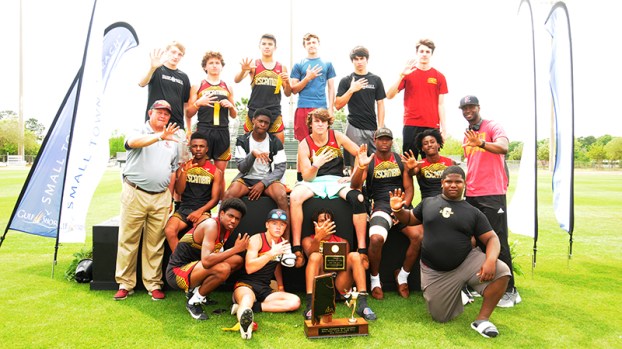 For the fifth time in a row, Escambia Academy’s boys track and field team is on top of the mountain.

The Cougars claimed the 2019 AISA overall state championship April 12 in Gulf Shores, winning out by a slim margin.

EA tallied 85 points in the win, and had to overcome some adversity during the meet. Bessemer Academy came in second with 78. Northside Methodist finished third with 66.

“To me, five in a row for such a small school says a lot about their dedication and work ethic,” EA boys coach Hugh Fountain said. “Really, it’s just an extension of the weight room.”

Fountain said this is the 2A school’s third year in a row to win the overall title.

Fountain said every point mattered in this meet.

“I thought they handled adversity well considering,” he said. “There was more pressure in this meet. The last couple of years, there was no pressure.”

To get to this point, EA did a good job of creating depth all year, the coach said.

“The main thing was creating depth all year,” Fountain said. “Then, it was about everybody doing what they got to do as the season went along. We went to Florida and Mississippi to run. All of those helped us.”

On the state meet itself, the Cougars had to find substitutes for the 4×100-meter relay, along with the 4×400.

“We had to sub people out, which we didn’t do before,” Fountain said. “The depth really helped us.”

The following are those who placed during the state meet: