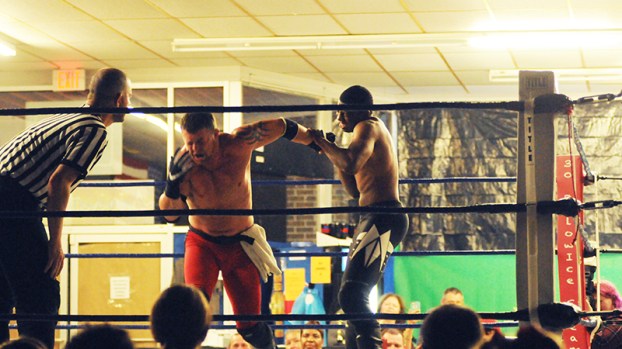 Cleveland “Downtown” Biggs Jr. (right) wrestles in a singles match during an earlier show this spring. Shown below: Biggs is shown in his gear. | Andrew Garner/Atmore Advance

Biggs will be signing his first contract with the local wrestling promotion to become a part of the main roster at AME’s second show in May this Saturday. Doors open at 6:30 p.m., and bell time is at 7.

Biggs’ journey as a wrestler began last year as a student for AME Owner Danny Rolin, who has wrestled in WWE, ECW and other promotions.

“When I graduated high school, I really didn’t have anything going for me,” Biggs said. “I went to college for graphic design, but I realized I wanted to do something else. After trying to figure out what I wanted to do, I thought about wrestling. I started to look online, and there were places in the lower part of Florida.”

For Biggs, traveling that far a distance wasn’t going to work. Fortunately for Biggs, Rolin’s first wrestling promotion in Atmore was about to kick off.

“Somebody ended up telling me there was a pro wrestling place opening up soon, and to go check it out,” Biggs said. “I actually thought they were joking. I was like, ‘all right, this is now or never, and I’ll need to go for this or sit back and let it go by.’”

Biggs said he went through a tryout with Rolin, and was invited back to be a student.

Since then, the Atmore resident has been training and wrestling for the wrestling promotion. His debut match was in a battle royal in March during a spring show. A battle royal is a match where multiple competitors wrestle until one is left in the ring.

Biggs said with it being his first time, he wasn’t completely satisfied, but felt like he did OK.

Biggs’ first singles match was against T.A. Jones, an opponent whose chops (slaps across the chest) were intimidating, he said.

Rolin and his wife, Connie, helped design Biggs’ character’s costume, which includes lighted sunglasses, a denim jacket and black tights with a swirling pattern on them.

Biggs said Rolin helped him put together his character.

“My tights I had to buy those off of Amazon,” he said. “Danny saw the design on the side, and he thought the design reminded him of Van Halen and that’s where the music came from.

Biggs described his character as a cheerful, for the people type of character and one that resembles himself.

“When they see me come out, they know I’m here to put on a show,” he said. “That’s how I feel what my character is. And, it’s me. I feel more comfortable being this person because that’s who I am.”

Rolin said Biggs has the potential to be a well-known name in the industry.

“I just think if this goes like I want it to go, I don’t think Cleveland will be a Hulk Hogan, but he’ll be known,” Rolin said, adding that he believes that Biggs has the potential to be like WWE superstars Aleister Black and Ricochet.