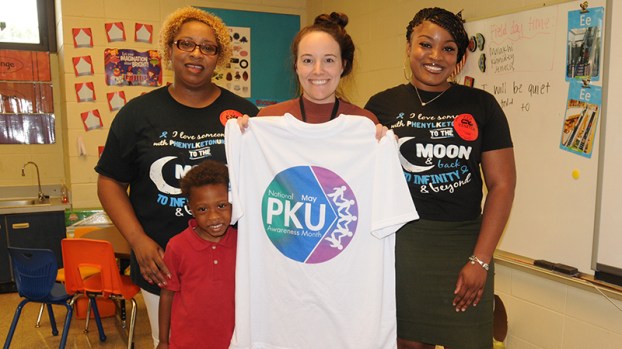 LaTongia Tucker is on a PKU mission.

Tucker spoke to her grandson’s class May 16 at Rachel Patterson Elementary about phenylketonuria (PKU).

Tucker’s grandson, Kyan Green, was diagnosed with PKU when he was a baby. She told Green’s classmates that her grandson can’t have protein.

“Protein is something in all of our food, even seasoning that Kayan can’t have,” she said. “He can, but it’s limited. What I have to do and his mom (D’Asia Johnson) has to do and what Ms. (Shirley) Longmire has to do, is make sure Kayan stays on a proper diet.”

PKU is a rare inherited disorder that causes an amino acid called phenylalanine to build up in the body. PKU is caused by a defect in the gene that helps create the enzyme needed to break down phenylalanine, according to the Mayo Clinic’s website.

Those with PKU need to follow a limited diet of phenylalanine, which is found mostly in foods that contain protein, according to the Mayo Clinic.

Tucker said Green’s food has to be special ordered.

“We can’t just go in the store and buy him a pizza,” she said. “His ordered food is low in protein.”

Tucker also spoke to Green’s classmates about the dangers of bullying.

May is National PKU Awareness Month, Tucker said, and the reason why she wanted to educate Green’s classmates is because it’s important for them to know for next year.

“He can have Kamburgers, they’re actually made of mushroom patties,” she said.

“It’s very important to not share with him,” Johnson said. “It will affect his nervous system causing his brain to swell. Basically, things you all can eat, he can’t eat.”

More than 100 graduated from Northview High School in a commencement exercise on May 18 at the school. Valedictorian Delaney... read more