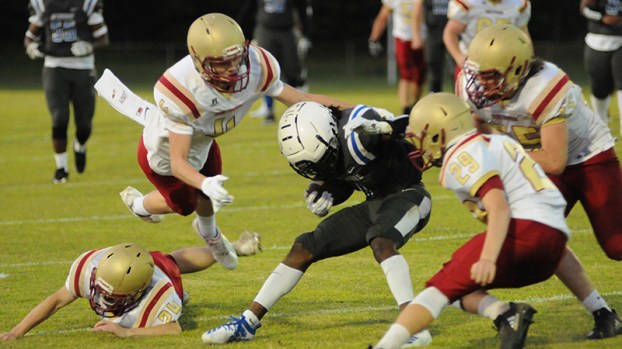 Escambia County defeated Northview 21-12 in varsity action during a spring football game May 17 in Atmore.

The Chiefs’ junior varsity squad topped the Blue Devils 14-0 in the final quarter of play.

Quarterback Jacob Hammac was 7-of-12 for 156 yards and two touchdowns for ECHS.

“I was pleased,” ECHS head football coach Scott Mason said about the game. “We just had a lot of dumb mistakes. We put ourselves behind. They’re learing a new system, and the ball is on them so fast.”

Mason said he believed the team threw the ball well, and once things calm down and the players learn the offense more, they’ll be fine.

“I was very pleased with our blocking,” he said. “We got tired there at the end.”

Hammac added a 4-yard touchdown rush, and a 33-yard scoring pass to John Dirden to make it 21-6 late in the second quarter.

“To me, there wasn’t much difference from us in the first and second halk other than mentality,” NHS head football coach Derek Marshman said. “We let emotions take over the game. We just kept running our offense in the second half. We just talked to them, and reminded them to control what you can control and play football.

“As far as the first half, we just killed ourselves,” he said. “We turned the ball over three times.”

Marshman said the team will go over any improvements that need to be made, along with having normal workouts during the summer.

Mason said the team enters the summer with a lot of momentum.

“To run a college offense, this is as high tech as it gets,” he said. “They had a lot to learn in a short amount of time. I thought they did excellent. The offensive line did a good job. They understand what we’re doing. We play a team that’s running the same system for years, and we came in and ran something brand new.”

In other spring football action, Escambia Academy played in a scrimmage against Autauga Academy and Chambers Academy on May 14.

EA head football coach Hugh Fountain said the format rotated each team in and out for 12 plays.

“We had a rotating scrimmage schedule,” Fountain said. “There was no score kept. It was a good thing because we were able to see a lot of guys in action. Everybody got to play in the spring game. That was very beneficial for us.”

This was the first spring game for the Cougars in two years. Two years ago, the game got rained out, and then last year, EA couldn’t find an opponent, Fountain said.