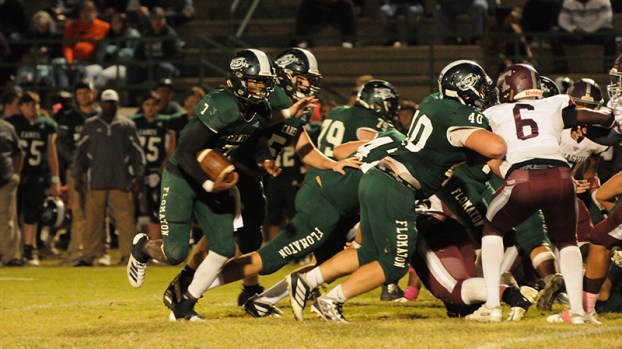 “We did some good things,” he said. “They’re big, fast, and strong and a well coached football team.”

Mason said UMS is a prime example of what the Blue Devils want to be.

“That’s a mature, older team,” he said. “They are running the same system all the time.”

Jacob Hammac threw a 64-yard touchdown pass to Allen Patterson in the third quarter for ECHS’s only score of the game. Ja’Coby James completed a pass to Willie Banks for the 2-point conversion.

Next week, the Blue Devils have an important Class 4A, Region 1 contest against Williamson at home.

ECHS needs to win the game to clinch a berth in the playoffs. The Blue Devils are 3-3 in the region.

Sims connected with Shannon Wheat on a 64-yard touchdown pass on the first play of the game to start the spree.

He then rushed in from 56 and 18 yards later in the first half, and found Ty Williams on a 45-yard pass to make it 34-0 at the break with an Orlando Medina extra point try. Sims also connected with Chase Bell on a 12-yard passing score.

In the second half, Sims scored on a 6-yard scamper, and Caleb Davis had a 45-yard pick six.

EA head football coach Hugh Fountain said the team has to get back to work to get ready for next Thursday night’s road game at Lowndes Academy.

The Cougars will be playing for the region title against LA. EA already secured a first-round home berth in the playoffs.

Flomaton’s Daquan Johnson and Jate’vius “Tank” Franklin scored one touchdown each in the third quarter and the Hurricanes pulled away to defeat Thomasville 44-21 to clinch a berth in the Class 3A state playoffs.

FHS head football coach Doug Vickery said the Hurricanes had been a little hampered with injuries, especially in the defensive back field, but held on in the victory.

“We had a couple of young guys who did good job for us,” Vickery said. “I thought we played a bit better than we have been. Physically, we ran the football and were very efficient with it.”

Ahead 14-8 in the third quarter, FHS broke the game open with Johnson and Franklin’s touchdowns after a couple THS turnovers.

Vickery said in spite of the lead, the team was concerned with the Tigers’ passing attack.

“We were still concerned about them throwing deep with the youth they had,” he said.

Next week, FHS played T.R. Miller for a shot at the Class 3A, Region 1 title.

In other action, T.R. Miller lost 26-21 to Montgomery Catholic in a non region contest.

Andalusia led 35-0 at halftime, and added a touchdown each in th the third and fourth quarters.