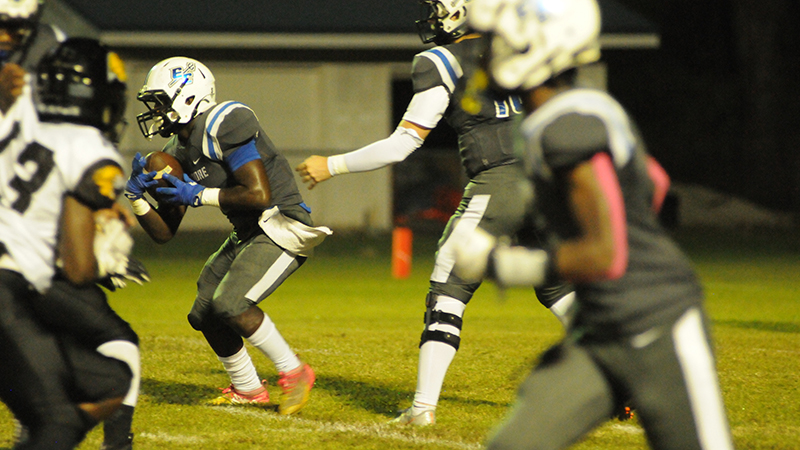 The winds didn’t blow Escambia County’s way Friday night as the Blue Devils fell 16-7 to Williamson in a key region battle in Atmore.

ECHS led 7-0 early, but the Lions of Mobile took advantage of an early fumble and turned it into points late in the first half to take a 8-7 lead at halftime. In the third quarter, Williamson increased its lead to a touchdown on a long scoring pass, and then added a safety in the fourth during the Blue Devils’ senior night.

Visibly upset, ECHS head football coach Scott Mason said it was an up and down game.

“It seems like it’s just been one of them two steps forward and three steps back (season),” Mason said. “It’s hard to understand why kids do what they do. We had no field position, and we could not get in front of the (first down) sticks at all.”

The Blue Devils came out hot on defense as Trevor Lambert recovered his first of two fumbles within a minute of the first quarter.

With a potent running attack behind the wheels of sophomore Willie Banks, ECHS put together an opening scoring drive. Banks punched the ball in from 8 yards out with 8:51 left in the first. With the extra point good from sophomore Aaron Colvis, ECHS led 7-0.

The Blue Devils’ defense held the Lions at bay for the remainder of the first half, but WHS took advantage of a Banks fumble with 3:11 until the break to do some damage.

Williamson senior quarterback Cedric Andrews scored from the 1 after a couple tries, and then connected with Ladarrious Brown for the 2-point conversion and a lead they’d never give up.

“That fumble killed us and that gave them the touchdown,” Mason said. “Then, we got beat on that on deep play.”

Mason was referring to the 64-yard pass from Andrews to senior wide receiver Devonte Scott with 6:07 to go in the third. The 2-point conversion failed.

Later in the fourth quarter, ECHS quarterback Jacob Hammac was sacked on third and long in the end zone for the Lions’ safety with 6:09 left in the fourth.

“This is growing pains,” Mason said. “It’s a process. Everybody says three to five years. I think we’re on the two-year fast track. You’ve got to learn how to win. Every time we did something good, there would be a penalty.

“The times they scored, they got two 15-yard penalties that gave them two first downs,” he said. “We just beat ourselves.”

For WHS, this will be the Lions’ third straight trip to the playoffs.

On the 64-yard touchdown play, Sumpter said they set the play up, and he was just “glad he caught it.”

ECHS ends its season next week at Francis Marion.