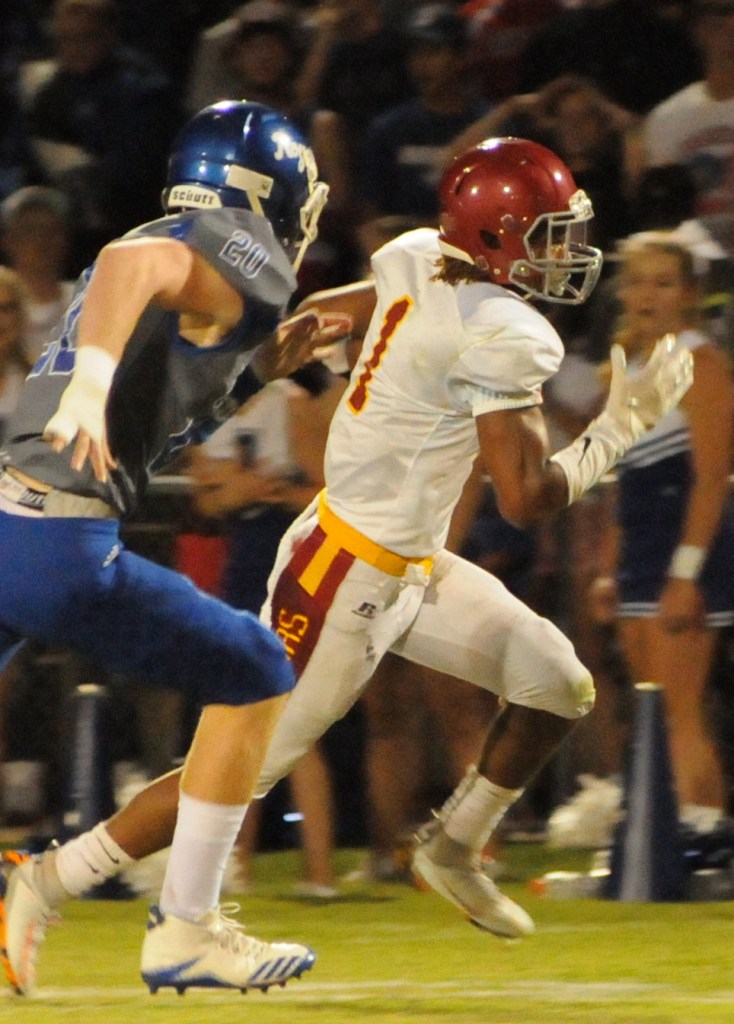 Escambia Academy seniors Jason “Jabo” Davis and Shannon “LowLow” Wheat are confident in their abilities to play football in an effective way.

So far this season, Davis has compiled …. Wheat has racked up 825 yards on the ground on 59 carries, averaging 12.1 yards per carry for the Cougars. Davis, a fullback, also plays middle linebacker, and Wheat contributes at corner back for EA.

“Last year, he didn’t play much, but this year he’s playing a whole lot,” Long said. “He’s doing the things that we want him to do. He’s having a good year as far as running the ball.” 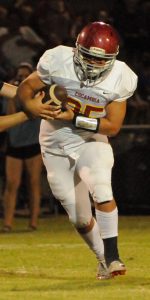 When asked what Wheat did to progress, Long said he hit the weight room more and focused on drills.

“That’s the biggest thing, compared to what he did a year ago,” he said.

On Davis, Long said he’s what “we call ground and pound.”

Long said EA uses him in short yardage situations, mainly on third down.

“He’ll get three yards, and if you’re inside the red zone, give it to Jabo,” he said. “He blocks LowLow on the ‘I’ formation, along with Daughtry (McGhee).”

Long recalls that when he first laid eyes on Davis, it was his first outing as a member of the junior varsity squad.

“(I saw) What you got now,” Long said about Davis. “He’ll go get it. He started on JV when he first started here as a fullback and running back. He’s played the same style the same way.

“Jabo goes where he’s supposed to go, and he’s an all around good player,” he said.

“With Shannon, what you have is a lot of speed,” Fountain said. “He’s one of the fastest kids in AISA. Even though he didn’t win the state championship in the 100(-meter dash) last year, he still had the fastest preliminary time last year. He also ran the 100 hurdles, 4×100(-meter). He had a multitude of events. In the finals, he run back to back.”

On Davis, Fountain said, “The biggest thing with Jabo is that Jabo is about power, and just kind of the way he plays the game. He plays the game aggressively. I told Jabo’s mom (Wendy) when he was a freshman, I said ‘it’s very rare that kids like to hit and are physical players.’ Jabo has alway been that way. You can’t take it out of him.”

Fountain added that Davis has always been a hitter, and plays football old school style.

“He plays that style of football,” he said. “He epitomizes it for us because of the way he plays the game.”

Davis has compiled 61 tackles (34 assists, 3 sacks, 8 tackles for a loss and a safety and forced fumble.) Wheat has 31 tackles, two interceptions, nine pass break ups and one fumble recovery.

Fountain said he has a strong memory of when he first met Wheat.

“I met him one day, and he came up to me because I remember his eyes,” he said. “He’s got these wolf eyes. He came up to me, and said, ‘coach Fountain, do you remember me?’ I said aren’t you Louie’s (Turner’s) cousin?’ He said, ‘Yes, sir, my name’s Shannon Wheat, and I will play for Escambia Academy.’

“He loves Escambia Academy,” Fountain added about Wheat. “I said ‘we’d be glad to have you.’ He came on not too long after that.”

Fountain recalled that Wheat had to work hard to rise in the ranks because he was behind some good players. He added that Wheat played a big part during the 2017 state championship game on special teams.

Fountain said Davis has always been a starter ever since he began his playing days at EA.

“Both have confidence in their abilities,” Fountain said. “They’re not going to back down from competition. We have several players that don’t back down. To me, they epitomize Escambia Academy football and embracing competition and work in the weight room and at practice.”