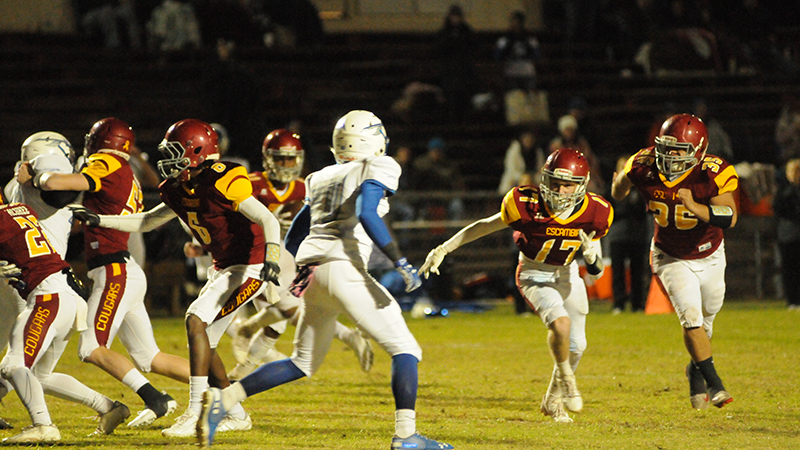 Cougars to play in in semifinals Friday

Escambia Academy is in familiar territory.

The Cougars will be playing in the AISA Class 2A state semifinals against No. 9 Edgewood this Friday night in Canoe.

EA head football coach Hugh Fountain said he had a feeling all season long that his Cougars would match up against Edgewood. Last season, the Canoe school beat Edgewood 39-31 in the semifinals.

“I was thinking all year that we’d match back up with them,” he said. “They’ve been aiming for us after the game last year.”

“He’s got a lot of speed. He’s fast,” Fountain said. “He catches the ball well.”

Fountain said Edgewood’s quarterback is a dual threat, and the Cougars will need to be careful with him.

Defensively, the Wildcats (9-2) like to run to the ball, and are big up front.

“I think it’s going to come down to who turns the ball over, and who makes the most mistakes won’t win the game,” he said.

Making it to their sixth semifinal game in the last eight seasons is a big feat for the Cougars.

Fountain said it all starts in the weight room because the players take pride in their hard work.

Fountain said he tells the players that down the road, making it to the semifinals will matter.

“I always tell the boys when you’re doing something today, it may not really about during the season,” he said. “It may mean something to you later in life. You see this stuff, and you say, for the moment, ‘it’s what it is.’ When you look back, you say six of eight is a lot for the kids. They can be proud of that.”

Fountain said the players know it’s a big game this week, and hopes they play well.

“We’d like to make the championship because for four years in a row, that would be quite an accomplishment,” he said. “Nothing is promised in football. You’ve got to earn it. For us, we’ve got to play the game to earn it.

“Nobody is giving it to us down the line,” he added. “You have to go down and earn it. You put in the effort for the year, and most importantly Friday nights in the high school. We’re only looking at the semifinals.”