‘THE HEART OF BOURBON’ 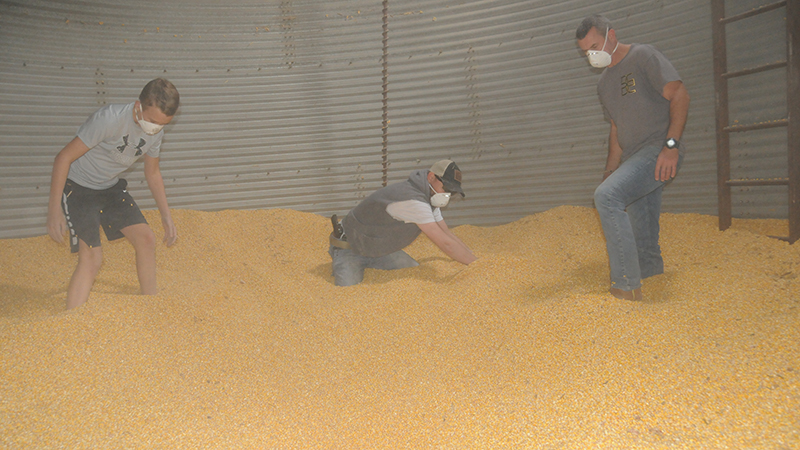 “The heart of bourbon is corn.”

That’s what Big Escambia Spirits LLC Owner Seth Dettling said while his 2019 crop of corn was being transferred from silo to truck recently.

Dettling stored his corn, which came from a field behind The Warehouse Market and Bakery LLC, in a silo behind a Robinsonville Road resident’s home in Atmore. The corn was being transferred by 18 wheeler to Lazy M Farm in Robertsdale, where the crop was cleaned and any debris and broken pieces of corn will be thrown out. From silo to truck, Dettling used a long cylinder tube that utilizes a screw to carry the corn to the truck.

“It requires a surprising amount of effort,” he said. “Now that it’s dry, it’s ready to go be cleaned and sorted, and bagged.”

Dettling said he aims for a 14 percent moisture content. Anything less is alright, too, he said.

Once the corn is bagged, it’ll be stored in a cool environment at the distillery.

“We store the corn at 60 degrees because that keeps the weevils dormant,” Dettling said. “We’re, in a way, preserving corn. We’re using temperatures instead of poisons.”

“This is a super important aspect,” he said. “The heart of bourbon is corn. People always advertise that we’re using unfiltered water, and their grand pa’s recipe. What really matters is ingredients. It’s everything.”

Dettling said he transports corn that’s been dried this time of year after cutting the corn in August.

Once the corn is ready, it will be used to make Big Escambia’s bourbon.

Recently, the Atmore distillery was designated by the Bottle-in-Bond Act of 1897. The act are rules that require spirits like whiskey to be aged and bottled according to a set of legal regulations. The primary purpose of the act is to guarantee that the product the consumer was buying was really whiskey, according to a standardized definition. The act requires the spirit to be the product of one distillery, and it must be bottled and stored in a bonded warehouses under the U.S. government supervision for no less than four years.