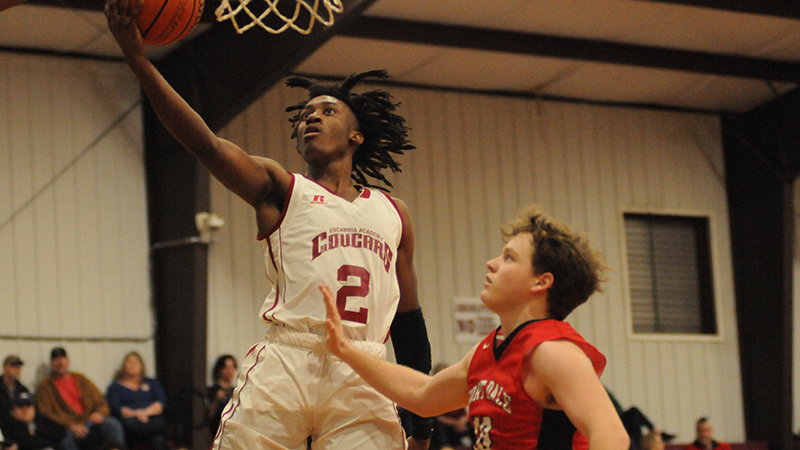 Escambia Academy’s Tiquale Taylor is playing on another level.

Taylor was recognized as being a part of the 1,000-point club before the Cougars’ 57-37 senior night victory over Fort Dale Academy in Canoe.

Taylor reached the milestone in a little over there years.

“It feels good,” he said about the accomplishment. “My teammates really helped me, and my coaches.”

Taylor said it took hard work, help from his teammates and coaches to get to where he is today.

Sitting in the stands holding a tablet, Taylor’s father, Cedric, can be seen filming his son’s play.

Taylor said his father has been a huge help.

“He’s helped me since I was little,” Taylor said. “He always took me through drills and stuff. He made me tougher.”

Taylor said Cedric is always encouraging him to instead of playing high school basketball, do stuff that can be a contribution at the college level.

“He’s a good kid,” Smith said. “(Taylor) knows the game, he understands the game. He’s a great teammate. Whenever he’s on the sidelines, he’s cheering the guys on.

“He’s a great kid, and you’re happy to see that he gets the award that he does,” he said. “He’s been working hard the last three years he’s been here.”

Smith said he wanted to make sure all the seniors were on the court when the final buzzer rang.

“It’s always a good game to win,” he said. “I’m just proud of the team because we’ve got a tough team. We’re looking forward to the Elite 8.”

Next Tues., Feb. 11, the Cougars will play at 1:30 p.m. in the Multiplex at the Cramton Bowl in Montgomery.

Smith said he’s planning on taking the team to Coastal Alabama Community College in Bay Minette for a game this week to help keep their mindset on the game. Additionally, Smith said he’s also trying to get a game going this week.

In varsity girls action, the Lady Cougars fell 51-27 to FDA.