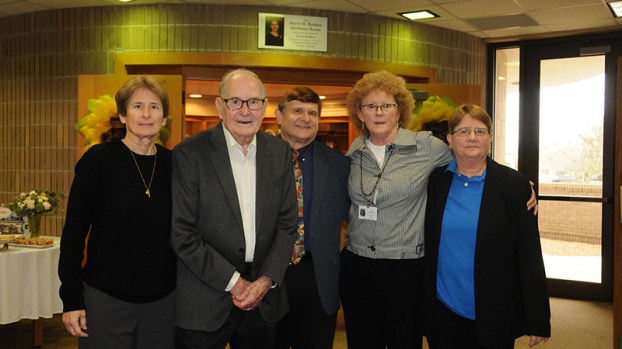 This is what Cindy Bolden told her father, Raymond, shortly after the dedication of the Joyce B. Bolden Alabama room at the Atmore Public Library on Feb. 10.

The room was dedicated in Joyce’s memory because of her support of the library and its programs. Joyce became the director of APL in November 1975. During her 30-year leadership, she helped consolidate the Cornelia Elmore Library with the W.R. Holley library to receive state aid from the Alabama Library Service in 1977; began a citywide newspaper drive to raise funds to benefit the library in 1983; helped build the current 15,000-square foot library on East Church Street, bearing the name Atmore Public Library, in 1984. Joyce contacted many officials and helped raise the 50 percent grant match; housed the Escambia County Cooperative Library System in the APL; formed the Friends of Library organization to support the APL in 1989; and designed an Atmore Monopoly game that featured local businesses. The sign was donated by Landis Designs.

“When you get my age, little things that didn’t mean much then become precious memories,” Raymond said during the dedication. “I remember when she joined the library at the old building. She thought, ‘we could offer much much more if we had more space.’

“She dreamed of a building,” he said. “She dreamed of more space. Word got around, and around Atmore, thousands of people got involved in the building of this building.”

Raymond said it was Joyce’s dream to build a bigger library.

“He dreams came true,” he said. “She was just totally devoted to it.

“If she was here, and I believe she is, she would say, ‘I’m very, very proud. And very honored.’”

APL Director Hope Lassiter presented the room in Joyce’s memory during a ceremony.

Lassiter said those who knew Joyce characterized her as a “visionary game changer, tireless, caring and faith driven.”

“Joyce Bolden made sure the library had a solid foundation,” Lassiter said. “She nurtured it; she encouraged it. She wanted to make sure that we would still thrive even after she’s gone. That’s what good leaders do.”