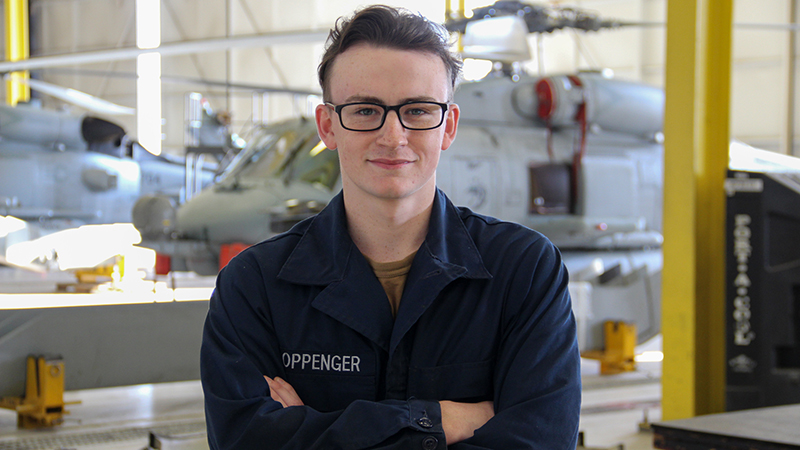 As a member of the newest Maritime Strike Squadron helicopter squadron, Airman Apprentice Jack Coppenger, a Flomaton native, is continuing a tradition while also creating a new legacy.

Coppenger is an aviation machinist’s mate who is responsible for helicopter mechanic work and making sure everything is maintained and ready to go for the pilots serving with Helicopter Maritime Strike Squadron (HSM) 78 which supports the aircraft carrier USS Carl Vinson.

“My favorite part about my job is learning mechanic work,” said Coppenger. “I have always been interested in that for my future career.”

Coppenger said joining the Navy is a fresh start for him after he moved out of Flomaton.

According to Navy officials, maintaining maritime superiority is a vital part of a Navy that is present today and prepared for tomorrow. The impact affects Americans and their interests around the world, as more than 70 percent of the Earth is covered by water and 90 percent of all trade travels by sea.

Helicopters are equipped with the ability to conduct replenishments at sea, search and rescue missions and support operations. Sailors assigned to HSM-78 participate in these operations, along with anti-submarine warfare and anti-surface weapons systems missions.

The helicopter squadron’s mascot is a blue hawk, which is symbolic of the dominance, versatility and lethality Seahawk helicopters have in combat.

The foundation of the Navy the nation needs includes a focus on warfighting, warfighters and the future of the fighting force.

“I am confident that we will maximize the Navy we have today while delivering the Navy that our nation will rely upon tomorrow,” said Adm. Mike Gilday, chief of Naval Operations. “We will do so with urgency. Our fleet will be a potent, formidable force that competes around the world every day, deterring those who would challenge us while reassuring our allies and partners.”

There are many opportunities for sailors to earn recognition in their command, community and careers.

Coppenger is most proud of earning the Blue Hawk of the Month in November 2019.

For Coppenger, serving in the Navy is a tradition passed down from generations and one Coppenger hopes to continue.

“My grandfather was in the Army and Coast Guard,” he said. “It makes me proud to be able to carry it along in the family.”

As a member of the U.S. Navy, Coppenger, as well as other sailors, know they are a part of a service tradition providing unforgettable experiences through leadership development, world affairs and humanitarian assistance. Their efforts will have a lasting effect around the globe and for generations of sailors who will follow.

“Serving in the Navy makes me very proud to do what I do and allows me to learn how to be a good mechanic,” Coppenger said.