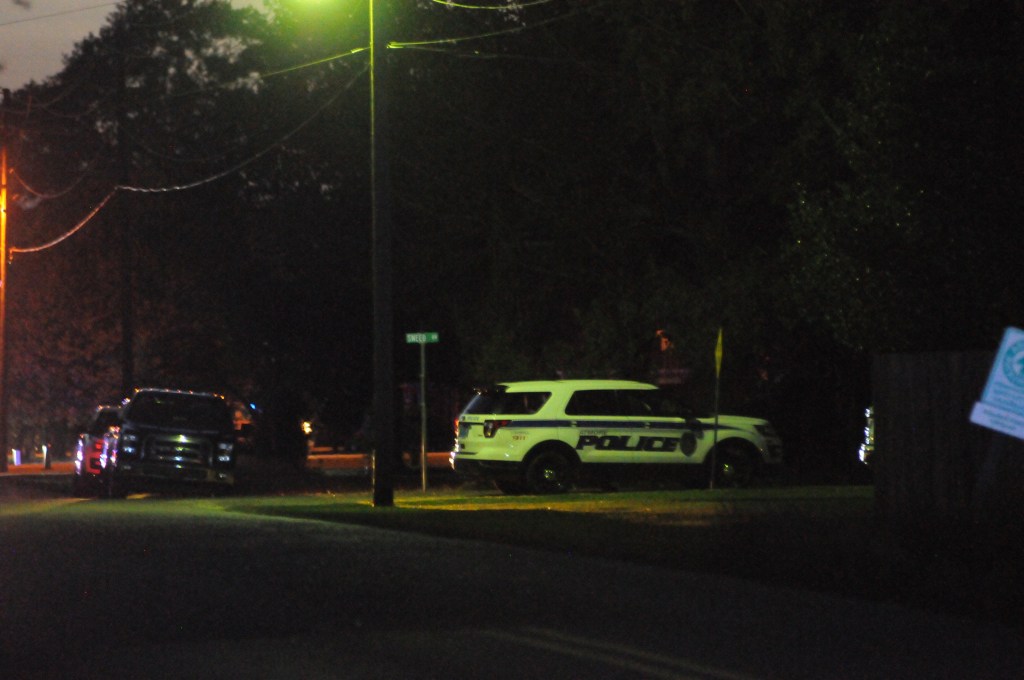 After a more than 11-hour standoff Tuesday at a residence on Sneed Drive, law enforcement officials took a suspect into custody, according to the Atmore Police Department.

Chief Chuck Brooks said during a press conference shortly after the incident was over that John Bradley James was taken into custody and was not injured.

Brooks said at approximately 6:50 a.m. today, he received a phone call from a friend who lives on Sneed Drive concerning a domestic situation between a family here.

“When officers arrived, the family had made it out of the house,” Brooks said. “The father of the suspect had an injury to his forehead. Basically, he said that the son had exited his house early this morning around 5, and when he went outside to smoke, the father went outside and met with him for a few minutes and spoke with him.

“The individual became extremely irritated and then threatened to kill his father, and then fired a warning shot into the air,” he said.

Brooks said James then allegedly took his mother and father back inside and held them against their will for a couple of hours, “until the mother was able to sneak out of their home.”
“The father then told the suspect that he was going to go see about the mother, and the suspect then allowed him to leave to go find the mother,” he said.
Brooks said there were two small children in the home that left with the mother, which only left James still in the residence.

A portion of McRae Street in front of the Methodist Church was blocked off by the APD until James was taken into custody.

Brooks was asked whether he believed James was going to harm any of the officers that responded.

“Just by his statements earlier today that he was going to kill people or injure officers if they came into the house,” he said regarding the shots fired. “At that time, we immediately began trying to negotiate with him. That was unsuccessful for a long period. We were finally able to speak with him and talk with him for several minutes, and then all of that stopped.

“At that time, we made a decision to go ahead and start putting tear gas in the home,” he said. “There were no other gun shots fired. I believe there were some reports of gunshots, but I believe they were the tear gas, or canisters going off in the home.”

When asked about other tactics that were used, Brooks said robotics were utilized.

“All of this equipment came from the state of Alabama SBI, the Monroeville Police and also Baldwin County,” he said. “I cannot thank each of those department heads enough for sending those people to help us. We are extremely happy that we got this matter resolved and no one was injured.”

More information on this story will be released tomorrow, and will be published on this space.

Round of severe storms slated for Sunday