Virus robbed me of bidding farewell to great friend 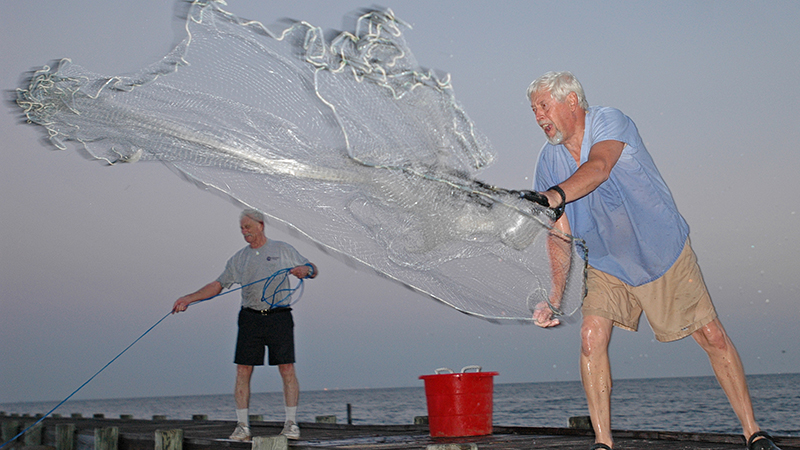 While I and my family have been blessed during the COVID-19 pandemic with basically no ill effects, the virus robbed me of the chance to say farewell to one of the people most influential in my career covering the outdoors in Alabama.

Robert Lee Rivenbark of Fairhope did not succumb to the coronavirus. He lost his battle with prostate cancer recently after a long struggle. He was 76.

Because of the virus restrictions, I was only able to visit over the telephone before he passed away.

Rivenbark fits in what I call my curmudgeon category. He could be short and to the point, and our last phone call started in typical fashion. When his wife, Charlotte, handed him the phone and told him it was me, no “How are you doing” or any such formalities ensued. The first sentence out of his mouth was, “Whadda you want?”

However, he always tried to help with what I wanted. When I first moved to lower Alabama to take the job as Outdoors Editor at the Mobile Press-Register in 1992, a friend of mine insisted I look up Lee when I got to town.

Boy, I’m glad I did. Lee was a man of the outdoors, from the intricate machinations of Mobile Bay to the haunts of the wary white-tailed deer.

In fact, we hit it off so well that before I got my family moved down, I rented a garage apartment on the Rivenbark compound on Mobile Bay at the south end of Fairhope, where the Rivenbark family had been since 1966.

It was a small apartment, but it had a great view of the Rivenbark pier and water beneath the pier light. Obviously, the pier light attracted bait fish and subsequently speckled trout and redfish. From my vantage point in the apartment, I could take a pair of binoculars and look at the pier. If I could see fish activity under the light, I would grab a rod and reel and head down to catch a few fish for the next night’s meal. If the water was calm, I’d roll over and go to sleep.

I don’t remember how many times Lee retold that story to illustrate how “sorry” I was, but it always ended in a big laugh.

Lee was the first to admit that he was not a hook-and-line angler. He much preferred a cast net and could throw a “silver dollar” every time. He tried to teach me but finally gave up when I got to the butterbean stage.

If mullet tried to swim past the Rivenbark pier when Lee was there with his cast net, the fish didn’t stand a chance.

Despite his reluctance, one day he agreed to go with me on a little fishing trip to the Grand Hotel jetties. I was dragging a plastic grub across the bottom, hoping to locate a few flounder. I caught a flatfish and cast right back into the same spot and hooked up again. I got Lee to cast in that spot and he hooked a fish. If our baits landed in an area about the size of a washtub, we ended up with a fish. We caught a dozen before the spot ran dry.

Lee, known as Uncle Lee to my daughters, had knowledge of Mobile Bay was extraordinary, and I was lucky enough to be on his jubilee hotline.

For those who aren’t familiar with the phenomenon, a jubilee happens when the bottom-dwelling fish and creatures in the bay end up on the shoreline.

Jubilees occur during the summer when patches of water with low dissolved oxygen form in the bay. With the right conditions, that oxygen-depleted water moves to shore, mainly Baldwin County’s Eastern Shore, pushing those fish and marine creatures ahead of it.

It usually happens in the wee hours of the morning, and a jubilee could include everything from flounder to shrimp to crabs to eels.

If I got a call at 4 a.m. and I heard “Rivenbark, Fairhope Pier,” I knew to jump up, grab my wading shoes, gig and light and meet him for the bonanza that is a jubilee.

Jubilees were always fickle experiences. Sometimes it would be only shrimp. At other times it was mostly flounder. At times it was everything, with blue crabs crawling out on piers and pilings to flounder stacked on top of each other trying to find oxygen.

When a thundershower moved through in the afternoon and the wind was blowing gently out of the east, Lee would tell me to expect a phone call.

But you never knew what you were going to get or whether it was going to materialize. One night we were all set for a big jubilee with everything falling into place. Just as the flounder got near gigging range, a huge wake from a ship heading down Mobile Ship Channel crashed ashore, and the jubilee vanished right before our eyes.

So many memories come to mind when I think about Lee, including the time we tried to go fishing in the Chandeleur Islands off the Louisiana coast. Tried is the key word here. We set out from Fly Creek Marina in Fairhope aboard Dr. Larry Ennis’ catamaran sailing vessel for an extended adventure. By the time we got south of Biloxi, Mississippi, we got bad news. Not one but two tropical systems were forming in the Gulf of Mexico. We turned the boat around but could only make it back to Pascagoula before we abandoned ship and called for someone to pick us up.

When it came to hunting, Lee had never really taken up the turkey hunting sickness because he was too busy taking advantage of the bounty of Mobile Bay during the spring.

But deer hunting was his main outdoor passion. He hunted deer from Colorado to Conecuh County and everywhere in between. Of course, most of his deer came from Alabama, and he was a meticulous record-keeper.

“He kept a record of all the crabs and mullet he caught off the pier and every deer he shot,” said younger brother John Rivenbark.

Lee was absolutely the luckiest deer hunter I have ever known. He could break all the rules and still be successful. He could be smoking a cigarette and the biggest buck in the woods would step out in front of him.

He had told me before the season started that all he wanted to do was kill his 400th deer. He only needed three to reach that milestone.

It was a struggle early in the season with the effect of chemotherapy on his body and the weather. Our mutual friend from Mississippi set up a hunt for Lee in Texas, but his health wouldn’t cooperate. I tried to set up a hunt for him at Bent Creek Lodge in Jachin, Alabama, but he wasn’t up to the trip.

With his brothers and friends like Ken Jansen, Judson Pizzotti and Gary Wolfe helping him along the way last season, Lee managed to accomplish his goal.

He bagged his 400th deer, a doe, with his twin brother, Arch, and family friend Carl Enfinger in tow.

Lee ended his deer-hunting career with 402 reduced to bag.

He asked me, after he knew this would likely be his last deer season, if I wanted one of his deer rifles or any of his mounts after he was gone.

I told him he should give those to family members, but I did have one request. He had a stainless steel rod, sharpened on one end with the small rope attached to the other. It was his custom flounder gig that allowed him to slide the gigged flounder down the rod and onto the string so he didn’t have to stop during a jubilee.

“Lee, all I want is your flounder gig if that’s alright,” I said.

“That’s all you want?” he said with curious look.

“Yep,” I said, “because every time I stick a flounder I’ll think of you.”

I hope to rekindle those memories of my great friend real soon.

PHOTOS: (jubilees David Rainer) With longtime friend Ken Jansen hauling in his net, Lee Rivenbark hurls his cast net into Mobile Bay during a shrimp jubilee. Rivenbark’s deer-hunting luck usually ended with the biggest buck in the woods walking in front of him. Rivenbark slides a flounder down his custom-made gig during a jubilee on the Eastern Shore of Mobile Bay.