Webb Nall announced his intention to run for re-election for the Atmore City Council District 1 seat on Monday. 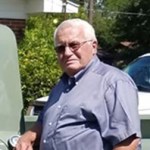 Nall has lived and worked in Atmore all of his life. He’s lived in District 1 all of his life, and recently retired from Pepsi Bottling Co. of Atmore after 52 years of service.

Nall has served on the city council for 24 years. Additionally, he has served under three mayors, including Mayor Patricia McKenzie, Mayor Howard Shell and current Mayor Jim Staff.

“I just want to continue the work we’ve done,” Nall said. “It’s not a one-man show. It’s a team of six people.”

Nall said if re-elected, he wants to continue the work the council has started, including beginning to improve the city.

“I’m looking forward to the building of the utility building for the street department, and continuing to help Atmore grow,” he said.

Nall is married to Frances, and the couple has two children – Richard and Keith – four grandchildren and two great-grandchildren.

Richard works at Swift Lumber Co., and his wife, Sunshine, works as a registered nurse at Sacred Heart Hospital in Pensacola, Fla.

Keith and wife, Gina, are teachers.