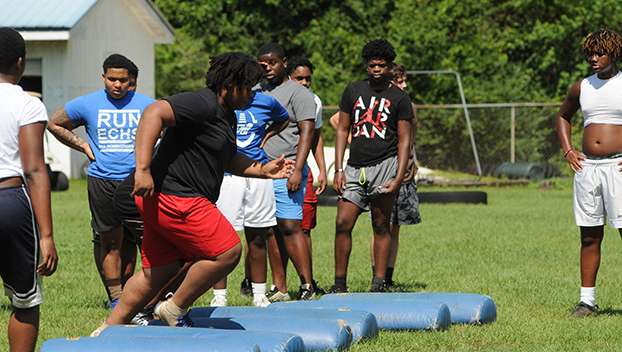 The Alabama High School Athletic Association’s Central Board of Control today approved the association’s Return to Play best practices recommended guidelines and reaffirmed plans to start fall sports on time, according to a release.

The action was taken today at the board’s annual summer meeting in Montgomery.

According to a release, fall sports teams have the option to begin fall workouts next Mon., July 27, with the first week used by football for acclimation purposes only with helmets and shorts only.

Other fall sports, including volleyball, cross country and swimming and diving, can use the first week for acclimation and tryouts. Schools not choosing to start July 27 can start fall practice on Aug. 3.

The first football contest is Aug. 20.

“I’m relieved that we finally got some type of closure,” Escambia County football coach Scott Mason said. “At least now we know that we’re going to go ahead. Now the fun begins. Now, we’ve got to figure out how to make it work. We still don’t have definitive answers from Mobile County on two teams we’re facing. As far as I know of they haven’t made a definite decision.”

Mason added that the community is still fighting the COVID-19 pandemic, which makes things tough.

“It just gets harder for practice,” he said.

Mason, and other county coaches, said players have to fill out a questionnaire and take their temperature every day; maintain social distancing; coaches have to wear masks; wipe everything after each use; clean bathrooms every day; spray helmets; and footballs have to be wiped down.

“We’ve always tried to keep it as clean as possible, but this has made it really, really tough,” Mason said, adding that preparations for the season have changed and just about impossible.

Mason said the coaches are following all guidelines set by the AHSAA, National Federation of Coaches and the Alabama Department of Public Health.

“Even with all of that, you just hope and pray it doesn’t get you,” he said.

W.S. Neal coach Andro Williams said the program has been working, and he thinks that the state is trying to make this as normal as possible.

“I just want to do what’s in the best interest for the kids and keep them safe,” Williams said. “What we’re doing here as far as safety here, is making sure kids are protecting themselves here. I think whatever we do as far as a school, we do the same thing to make it safe as well.”
Flomaton coach Doug Vickery said he takes a lot of precautions as well.

“I think there has to be a balance to this whole thing,” Vickery said. “I use medical gloves when I pump my gas, and I use Germ-X after I touch everything. I’m very cautious.

“Our kids, they’ve got to get back out and get back to some type of normal life with athletics and school,” he said. “They’re already out and about. The kids are going to the beaches and creeks. That’s why we’re probably having some of the numbers we’re having. “

Vickery said he doesn’t know if things will actually get better until the team is around each other.

“We’ve made every precaution we can here,” he said. “Our football players aren’t going to get it lifting weights.”

According to reports, local school districts have been given the authority to hold fall sports activities.

Green and Sumter Counties have stopped fall sports for nine weeks, and will reassess later.

Because of the Escambia County School District (Fla.) delaying its season start until September, FHS will have to find two other opponents to face.

For Escambia Academy, the start time will be the same as other Alabama schools, Aug. 20, and players are ready.

“We’re planning on starting on time,” Head coach Hugh Fountain said. “Nobody wants to have their seasons canceled. The baseball teams, for seniors (last spring), that was the end of their careers.

“Excited about would be an understatement,” he said.

AHSAA board approves ‘return to play’ on time in…