An Atmore man is behind bars after being arrested in connection with recent car burglaries that occurred July 24-25 and Aug. 4, according to the Atmore Police Department. 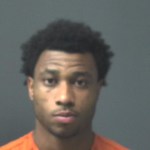 Brooks said the arrest stems from complaints from citizens who reported their vehicles had been burglarized and personal items stolen during the referenced dates.

Dailey was transported to the Escambia County Detention Center in Brewton.