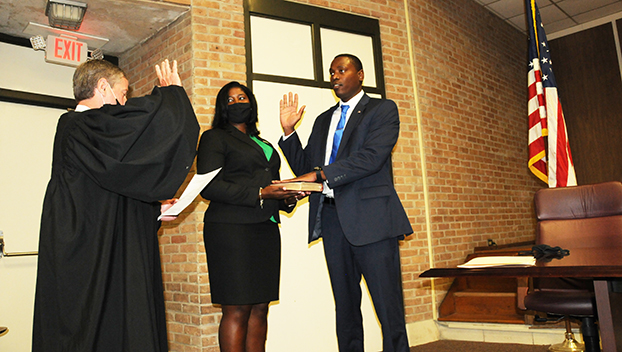 Sherilyn Reynolds looked on proudly as her husband, Kaurean, was appointed as the city of Atmore’s next municipal judge on Aug. 10.

Reynolds’ appointment was approved by the city council during the regularly-scheduled meeting.

“It feels great,” Reynolds said about his appointment. “I’m grateful for the opportunity. I’m looking forward to doing great things for the  city of Atmore.”

Reynolds replaces Circuit Judge Todd Stearns, who was appointed to the judgeship of the 21st district on July 31 during a ceremony at the Escambia County Courthouse. Reynolds will still hold his seat on the county commission.

Kaurean and Sherilyn are the parents of Na’Asia and Krysta.

In other action, the council:

• amended the minutes of the July 13, 2020 meeting to include the appointment of a delegate to the league of municipalities;

• tabled a decision on the Mediacom franchise agreement until the next meeting;

• adopted resolution 2020-15 for the 2020 Municipal Election officials. Councilwoman Susan Smith asked questions from voters on what provisions are being made by the city; the process of determining the individuals to serve at poll locations; and where the poll workers are going to be placed.

City Clerk Becca Smith said masks and hand sanitizer will be available at all locations; and poll workers were called by Mayor Jim Staff to serve again. All poll workers will be attending a training on Aug. 18, Smith said.

• adopted resolution 2020-16 for Main Street board of directors. The Main Street committee submitted nominations, and Smith asked if two additional selections can be added. Staff said only one, and she asked to add Bobby Maze to the committee;

• approved the appointment of Steven Shirley to the utility board. Jim Johnson is resigning from his post; and,

• approved the Atmore Youth League’s event Christmas in the Park.