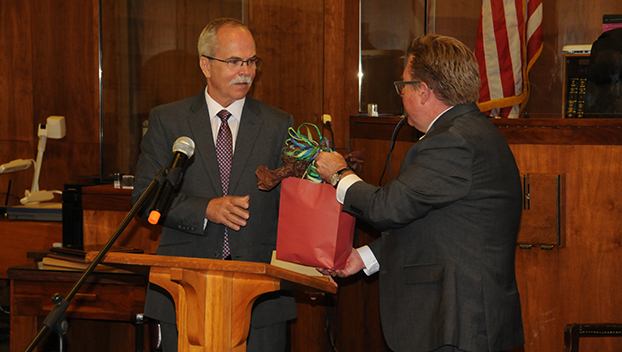 “He has told you, O man, what is good; and what does the Lord require of you but to do justice, and to love kindness, and to walk humbly with your God?”

Jordan was honored at a retirement ceremony at the county courthouse on Aug. 14 for his many years of dedication to the bench. He retired from his former post on July 31.

Family and colleagues spoke during the ceremony, where Jordan received gifts and honors.

Jordan served as a district judge for 12-and-a-half years as well as a juvenile judge. He then went on to serve as circuit judge six years ago. For 17 years previous, he practiced law in Brewton.

Jordan holds a bachelor’s degree from the University of Alabama, and earned a juris degree in 1984. He became the presiding circuit judge in 2014, and served in many civic organizations.

Moore said when Jordan first came to Brewton, he came from working at a Mobile law firm.

“Lee Otts and I saw something special in Dave,” Moore said. “We asked him to join our law firm and we never regretted our decision.”

Moore quoted Micah 6:8 during his comments, and added that Jordan, through his service on the bench, followed all of those requirements.

Alabama Court System Administrative Director Dr. Rich Hobson presented Jordan with a certificate from the Alabama Judicial College and a retirement plaque from the court system, honoring his many years of service on the bench.

To help him Jordan’s transition off of the bench, fellow Lawyer Earnie White wrote and gave a poem, offering humorous anecdotes.

“Take some time off, go out fishing and take some and go hunting,” White said. “Take Ms. Becky (Jordan’s wife) and have some fun.”

In a tribute address to her father, Jillian Jordan Evans talked about how Jordan was a loving father, and he poured everything he had into them. Jordan has three children, Matt, Jillian and Coale.

Jillian said she wanted to focus on the impact her father has had on the family.

“Today, I wanted to focus on what it’s like for me to be Judge Jordan’s girl,” she said.

Jillian recalled when she found out Jordan was going to be appointed as a judge.

“Leading up to Dad’s appointment, I could tell something was up,” she said. “I would put my ear up to (my parents) door, and hear what they were talking about, and knew he was about to take a new job. I somehow had convinced myself that we were moving.

“While at a dinner at David’s, Dad said he needed to talk to the three of us,” she said. “He told us there was about to be a change for our family. I screamed, ‘were not moving!’ He told us that ‘I’m going to be on the bench. I’m giong to be a judge.’ He started explaining to us that we’re going to have to make sacrifices and we’ll have to take a pay cut. Today, 18 years later, I am convinced and I know that this is what the Lord has called him to do.”

Jillian said growing up, all three of the siblings knew they had high expectations placed on them by Jordan.

“He wanted us to do the right thing, show up and give it 100 percent,” she said. “If we started something, we had to finish it. We knew we had to follow the rules.”

Jillian, a lawyer herself, said her dad worked an entire career for this moment, and that she’s blessed because her brothers along with herself have had Jordan as an example their entire lives to what it means to work hard.

“There are no short cuts in life,” she said. “There so examples to always be thankful for.”

Jillian said she remembered telling her dad that she wanted to go to law school.

She said Jordan told her that at law school she’ll have to work hard, that it was going to be difficult, but it’ll be worth it.

“My favorite call to him was when I passed the bar,” Jillian said. “I heard my dad say, ‘Praise the Lord!’ My husband is also an attorney.

“My dad told me that I am more excited about your results than my own,” she said. “Our (children’s) victories are his victories. He’s most happy when we are happy.”

Jillian said one thing she’s most thankful for is that Jordan, no matter his workload on the bench, poured everything he had into them.

“All three of us are very different,” she said. “He never missed my dance recitals, missed our games and he drove Coale to Monroeville for ‘To Kill a Mockingbird.’ With this profession I know how hard it is to leave your home. He pours into us when he is with us. As a kid I never knew what he was stressed about.

“When he was with us, he poured into us,” she said. “I admired that so much now.”