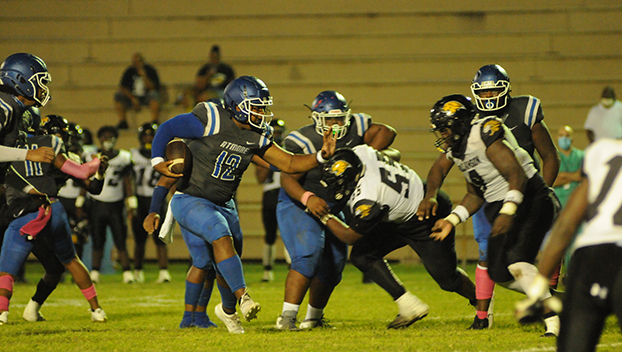 Williamson’s Ryan Kidd punched the ball in for a 8-yard touchdown with 2:38 left in the game, and quarterback Daniel Miller added a 2-point conversion to help lift the Lions to a 8-0 region victory over Escambia County Monday night in Atmore.

Both teams played a scoreless contest until the eventual touchdown by the Mobile team during the defensive battle.

“We did it to ourselves again,” ECHS head football coach Scott Mason said. “We had a bunch of penalties.”

Mason said late in the first half, the Blue Devils got to the red zone and with a little time left, wanted to throw the ball away.

However, ECHS quarterback Jeremiah George’s helmet was pulled off, forcing the Blue Devils to substitute him out of the game for one play.

“We had to get another kid in there,” Mason said, adding that the quarterback inserted into the game was told to throw a slant and if the receiver wasn’t there, just throw it out of the end zone.

In the first half, the Blue Devils put together some good offensive drives, but constant holding penalties quelled any momentum.

With this loss, ECHS falls to 2-5 overall, and 1-3 in Class 4A, Region 1. The Blue Devils visit region foe W.S. Neal this Friday night.

Mason said in order to get in the playoffs, the Blue Devils have got to beat WSN and Jackson, their next two region opponents.

Kick off in East Brewton is 7 p.m.