Murray Dwane Ellison, 84, a native of Covington County and a resident of Atmore, passed away on Oct. 16, 2020. 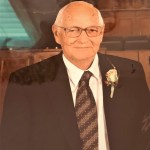 He was born on July 3, 1936 in Rose Hill to the late Ammie Dewey and Ethel Dean Wasdin Ellison. He was employed by the U.S. Postal Service in various offices and positions for 40 years retiring as postmaster from the Flomaton Post Office.

He served in the U.S. Air Force from 1954-1958 during the Korean conflict. He was a member of Judson Baptist Church serving in positions as deacon, Sunday School director and adult Sunday School teacher over the years. Mr. Ellison’s pastime was building cabinets and traveling with friends. He was a friend to everyone he met and will be remembered for his humor, generosity and honesty.

In lieu of flowers, donations may be made to the Pilots for Christ, P. O. Box 707, Monroeville, AL 36460, American Heart Association or The Alabama Baptist Children’s Home of Mobile, AL.

The family of the late Murray Dwane Ellison wishes to express our sincere thanks to our many friends for your support, prayers and many acts of love shown during this most difficult time. Your kindness shall not be forgotten.

We are comforted by the faith and promise that he has gone to meet his Lord and Savior.