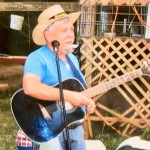 He was born on Oct. 5, 1953 in Monroeville to the late James Wilson and Myrtice Sawyer White.

He served in the United States Army and was a member of Carney Lodge No. 549.

He is preceded in death by his parents; his son, Jonathan White; his sister, Nelda Sharon White; and his brother, James Donald White.

He is survived by his daughter, Joanna White of Atmore; and his sister, Julia (Gary) McCrory of Columbus, Ga.