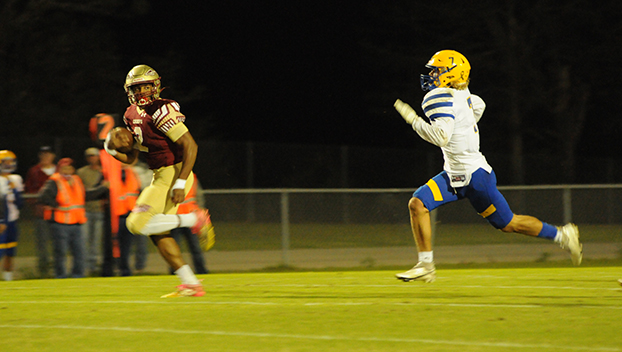 Jayden Jackson breaks a long run and looks back.

The Northview senior has been doing such during a record-breaking season, helping lead the Chiefs to a 5-1 record so far this season.

Jackson, at running back, has compiled 1,338 yards on 108 carries and scored 17 touchdowns as of Fri., Oct. 23. He has also tabulated 87 yards on two receptions and a touchdown.

“But the thing that is most impressive is what a great leader he has been for our football team,” Proctor said. “He is being a great mentor to our two underclassmen running backs (Jamarkus Jefferson and Luke Bridges).

“He’s helping get them ready to take the reigns when he is gone,” he said.

Proctor added that Jackson is a tremendous young man, and the kind of guy you want in a program.

Jackson is one of many running backs that have helped set a standard at NHS.

Running backs coach Jeremy Greenwell said Jackson is toward the top of a long list of running backs at the school.

“Growing up as a Northview guy, I remember being 12 years old and trying to get a good seat at the games as early as possible because you know running backs back then, Greg Gibson and Johnny Carter, were giogn to break one at any time back in 1998,” Greenwell said. “Through the years we have had some great ones, Leonte Lett, O’Neal Dubose and Chase Lashley from the 2001 season.

“Then Nakita Myles, a four-year starter from 2004-08, who had the school career rushing record until Jaydon broke it last week,” he said. “Also, you had Rodrick Woods and LaMichael Kyles from the 2012 state championship team.”

“We have had a great tradition of running backs here at Northview through the years,” he said. “Jayden is definitely toward the top of that list. He’s a kid that has great skills and great character on and off the field.”