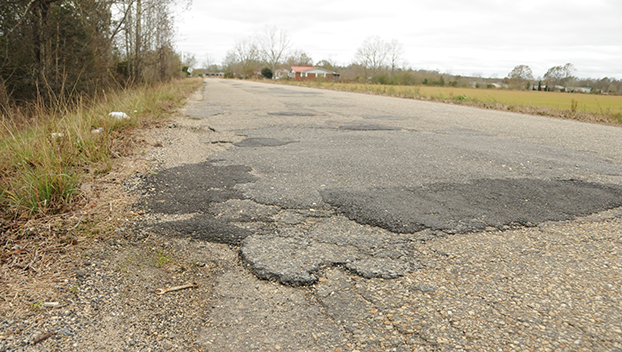 Fay and James Pettway, residents along the road in question, were looking for details on why the road had been passed over for repairs or resurfacing, and has been left in deplorable conditions.

“We live like animals out there that have been forgotten,” Fay Pettway told commissioners. “What can I do to get Ewing Drive repaired? Patching there doesn’t work. It’s like riding a bucking horse down the road.”

Ewing Farm Road is located in District 4 with representation by Brandon Smith. A portion of the area also falls into District 5, represented by Karean Reynolds.

Smith told Pettway that the road has not been overlooked, but that funding has been an issue for the past several years.

“We have discussed this issue in many of our meetings,” Smith said. “We are going to take care of your area. We had gotten a $2.3 million estimate to resurface and repair the road and we just didn’t have the funding for it. But, we are moving forward with plans to get that first mile of the road taken care of as soon as possible.”

Smith explained that the Poarch Creek Indians had applied for a federal grant to cover the cost of resurfacing Jack Springs Road from the city limits of Atmore to the reservation lands. Included in the grant requirements, PCI was instructed to handle repairs in two to three arteries that serve Jack Springs Road with Ewing Drive to be included in those additional repairs. PCI will cover the majority of the resurfacing of Ewing Farm Drive with the county agreeing to make repairs to the first mile of the road from it’s beginning along Jack Springs Road.

Smith told Pettway that there had been some confusion on certain aspects of the project that have now been resolved.

“We have worked out those issues and we will be replacing a large pipe that we thought someone else was going to take care of,” Smith said. “But, we have gotten to the point that we will be moving forward with that pipe replacement and taking care of that first mile of Ewing Farm Road.”

County Engineer Bill Bridges confirmed that statement by letting Pettway know that funding had been the initial issue.

“We don’t have a lot of money to do those repairs,” Bridges said. “But we reached an agreement last week to move forward in the work.”

Smith said that without the partnership with PCI, the project may not be moving forward as it will now.

“Without the Poarch (PCI) partnership, we would even be able to look at even the first mile,” Smith said. “But the funding is coming. The money for the first mile of the road repairs is there and it’s not going anywhere. We will be taking care of you.”

Bridges said the partnership with PCI is beneficial to the county in several areas across the 880 miles of roads the county is responsible for maintaining.

“The (PCI) grant is a great thing,” Bridges said. “It’s wonderful that they do that for us. They don’t have to, but they do. We thank them for what they do in the county. Weather permitting, we will be moving ahead with our work there as soon as possible.”