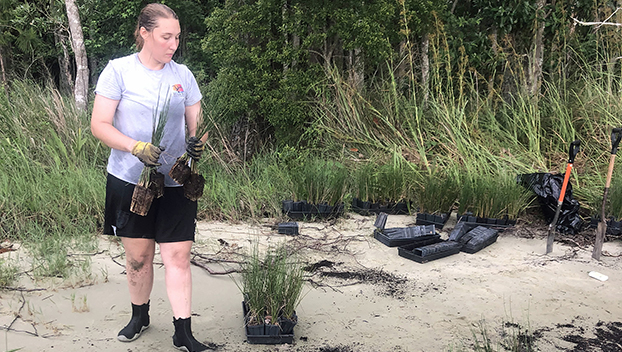 Heading into the new year, the foundation that has promoted the conservation of unique habitats in Baldwin County has broadened its scope with its vision and a name change. What once was the Weeks Bay Reserve Foundation, which has been in existence for 30 years, is now the South Alabama Land Trust (SALT).

Alabama Department of Conservation and Natural Resources (ADCNR) Commissioner Chris Blankenship is thankful for the work of the group, past, present and future.

Ellis Allen, SALT’s chairman of the board, said the name change was appropriate for the group’s future.

“Historically, the Weeks Bay Reserve Foundation started just as a friends group,” said Allen, who has been with the foundation for 25 years. “About a decade ago, we expanded our mission to more than a friends group and became an accredited land trust. With that change, we started holding some conservation easements. We started doing land monitoring. We did more than just managing a few pitcher plant bogs and a little watershed.

“This new change is kind of an expansion of our scope but not necessarily a change in mission. We will still be concerned with pitcher plant bogs, estuaries, marine invertebrates and water quality. But we will now have properties that we own outright or manage through conservation easements that have been granted to us.”

Allen said SALT manages property in south Baldwin County and on Dauphin Island and will soon hold a conservation easement in the Mobile-Tensaw Delta.

“Our scope has expanded, and our footprint has expanded, so the South Alabama Land Trust is more inclusive of that, rather than saying the Weeks Bay Reserve Foundation, which would imply only the watershed of Weeks Bay,” he said.

In contrast, the property SALT will manage in the Elberta area is mostly upland habitat.

“The man who gave that to us wanted to set an example for his grandchildren,” Allen said. “We will manage it for the preservation of watershed to make sure it’s not getting eroded, polluted, stripped or allowing unsustainable agriculture. It will be like we manage our other properties.”

One of the properties on Dauphin Island that SALT is associated with is the Dauphin Island Audubon Bird Sanctuary, a popular attraction for birders from around the country who visit the property and take advantage of a 1,000-foot-long boardwalk that traverses the barrier island habitat.

SALT has recently been granted a conservation easement in the Gulf Shores area. The easement surrounds Oyster Bay and includes several hundred acres north of the Intracoastal Waterway. The property was acquired by the City of Gulf Shores with funding through the National Fish and Wildlife Foundation’s Gulf Environmental Benefit Fund (GEBF).

The GEBF expenditures in Alabama are coordinated by ADCNR.  “The Oyster Bay project will include installation of interpretive kiosks, walking paths and public access including kayak launches. It is a good project for Coastal Alabama. The conservation easement held by SALT will ensure this property will always be preserved,” said Commissioner Blankenship.

Allen noted that the Oyster Bay easement is SALT’s first collaboration with a municipality but that the organization is also working with the City of Mobile on a conservation easement on Perch Creek in the headwaters for Dog River.

SALT has also been involved in the acquisition of a large tract of land that belonged to the Holmes family on Magnolia River.  This project was funded through the Natural Resources Damage Assessment program, where Blankenship serves as the lead trustee for Alabama.

“I am thrilled we were able to work with our federal partners to get the money for this key acquisition,” said Blankenship. “Preserving land around Weeks Bay and its tributaries is critical to maintaining the ecological treasure that we have in that area.”

Allen said SALT’s origin started many years ago through the work of John Borom, Skipper Tonsmeire and Jack Edwards, who secured funding through the Tennessee-Tombigbee mitigation process to facilitate the creation of the Bon Secour National Wildlife Refuge and the Weeks Bay National Estuarine Research Reserve.

“I’m really proud of where we are,” Allen said. “We have our fingers in a whole lot of pies. We’re growing in our scope, in our board and our geography. We’ve come a long, long way.

“We love to work with Mobile. Plus, Foley is growing exponentially. With all the paving of streets and parking lots, it is channeling water into areas, increasing the risk of flooding downstream in the Magnolia and Bon Secour rivers. We would love to work with cities to talk about sustainable paving and permeable surfaces and be conscientious of where the water is going. If we’re going to maintain the quality of life we have, we’re going to have to be very careful about how and where we build.”

The growth in SALT’s board includes incorporating the younger generation to bring in new ideas and help with the outreach.

One of those new board members is Chesley Allegri, who moved back to Fairhope, her hometown, about five years ago.

“After I moved back, I was looking for a way to reconnect and get involved in the community but do it in a way that I was passionate about,” Allegri said. “The outdoors and environment are important to me. I knew a little bit about Weeks Bay Foundation but not a lot. I got involved by volunteering at the Bald Eagle Bash. I reached out to people I knew on the board to see how I could get involved more. I was lucky that there were some very dedicated people on the board who had served a long time, and they wanted to add some new people.”

Allegri said one of her goals is to get more people involved in preserving the wonderful habitat and enjoying outdoors opportunities that are plentiful in south Alabama.

“What I want to focus on is making sure people who move to our communities are aware that just because you don’t have a kayak doesn’t mean you can’t go out and do a guided kayak tour,” she said. “If they don’t love the water, they are not going to support it and care to keep it clean. We want to teach people why the conservation of land on the water is important. We can’t just build on every square inch of water. Education is not just about lecturing somebody about a land trust or conservation. We want to get them out there to enjoy it so they will want to protect it. We want people to learn to love our natural resources.

“And even though we are a land trust, we want to make sure we have places open to the public to enjoy these resources.”

Allegri suggests anyone interested in preserving the outdoors way of life in south Alabama should consider attending a Bald Eagle Bash, taking a guided kayak tour or volunteering for restoration and cleanup projects.

“We did a restoration project last year on Fish River,” she said. “We planted many, many pine trees by hand. It was really fun. Especially now more than ever, people want to be outside doing things.”