After slow start, EA bounces back in 4th to edge Sparta 46-40 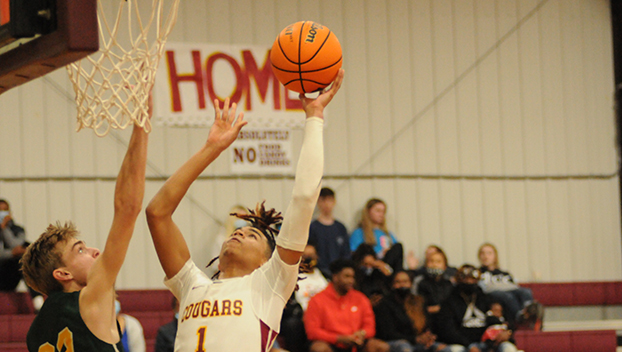 Escambia Academy trailed through the first three periods tonight, but the Cougars bounced back in the fourth to edge Spart Academy 46-40 in region action.

The Cougars got off to a slow start, trailing 6-5 after the opening period and 20-15 at the break. Sparta led 29-28 going into the fourth period.

With the victory, EA improves to 4-6 overall, and 3-2 in AISA Class 2A, Region 2. The Cougars will face Wilcox Academy next Tues., Jan. 19, in a big road region contest. EA defeated Wilcox 53-42 on Tuesday at home.

EA boys basketball coach Willie White Jr. said a lot of the slow start was the result after a tough 45-43 Thursday night loss to Lowndes Academy.

“We gave one away last night,” White said about the loss to Lowndes. “We had a tie ball game with 1:40 left, and ran it down to 2 seconds for one last shot. We take the last shot and missed. With 1.3 seconds left, we foul somebody. They made the two free throws.”

However, White said the team is still in the driver’s seat in regard to region play.

“We’ve got another one Tuesday night,” he said, referring to the game at Wilcox Academy. “If we get that, we should win the region.”

White said sometimes it’s hard to come back and play hard against another team after making an eventual game-losing play Thursday.

“I knew it was going to be hard one me and hard on them, but they came back,” he said.

White said even though point guard Bubba Nettles fouled out in the fourth, EA had some other people step it up in the final period of play Friday.

“We just started slow,” he said. “We missed so many easy shots that we could’ve put it away. We kept them in the game by fouling. We just got to stop making bonehead plays and use our minds and just be patient.”

EA took its second lead of the game early in the fourth period, a 30-29 advantage, adn then lead 33-31 a short time later.

After a 8-0 run, the Cougars took a 44-38 lead, thanks to some rebounds and buckets off of transition.

Malaki Hanes converted a rebound into an old-fashioned 3-point play try with 44.6 seconds left, and EA held in the end.

Bryson Pate and Jesse Anderson led Sparta with 11 points each.