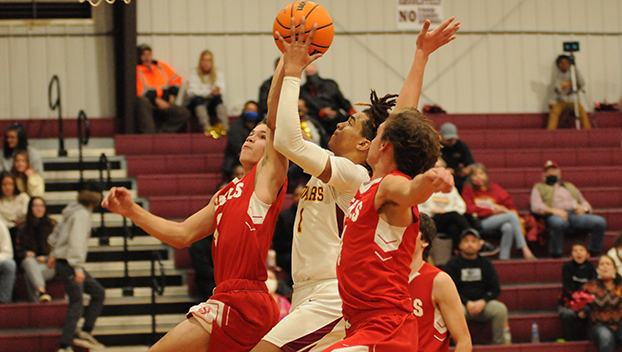 Four Escambia Academy boys basketball players finished in double figures tonight to help lead the Cougars to a 70-35 victory over South Choctaw in the first round of the AISA Class 2A state playoffs in Canoe.

Malaki Hanes led the way with 17 points; Daughtry McGhee chipped in 14 points; Landon Sims had 13; and Bubba Nettles scored 10 in the win.

With this victory, EA improves to 7-8 overall, and advances to the Elight 8. The Cougars will face Chambers Academy this Sat., Feb. 6, at 9 a.m. at the Multiplex at the Cramton Bowl in Montgomery.

“This was a very important game,” EA coach Willie White Jr. said about the win over SCA. “We just had to win it in order to get there (Elite 8). We played well to start out, and then I let the subs play, and they cut it to five.

“We had to come back out (in the second half) and reestablish our dominance and we did that,” he said.

McGhee hit a 3-pointer a short time later, and the Cougars led 23-7 going into the second period.

South Choctaw, with some conversions from the arch, went on a 17-6 run in the second period to cut the game to 29-24 at the break.

Nettles added six rebounds and steals each; and eight assists. Sims and Hanes had three blocks each.

Caleb Davis and Chaston Helton contributed with eight points each for the Cougars.