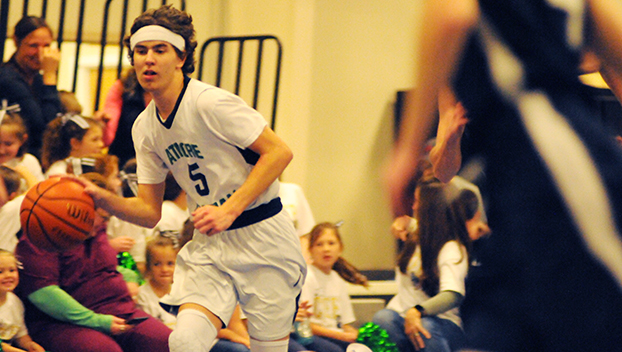 After losing five straight, Atmore Christian School got back in the winning column with a 59-30 decision over South Baldwin Christian Academy Thursday night at home.

Caeden led the Rams with 21 points and 10 rebounds; Gades added 13 points; and Emmett contributed with 11 points.

With the victory, the Rams enter the PCC West Conference playoffs as the No. 3 seed. ACS will play the loser of the South Baldwin and Aletheia game next Thurs., Feb. 11, at 6:30 p.m. at home in a regional contest. SB and Aletheia play tonight.

“We did pretty well,” ACS coach Tim Battles said. “It wasn’t perfect. We had a hard time making some shots, but we got through it and got the job done.”

The game was tied 11-11 after the first period.

The Rams utilize an inside attack game on offense, but were forced on the outside in the second period. ACHS led 20-15, senior Reese White then hit two 3-pointers back to back to effectively put the game away.

“They did a good job of clogging,” Battles said of SBCA’s defensive game plan. They have some size and length.”

“They (SBCA) were never really back in it after those threes,” he said.

In the second half, the Rams outscored SBCA 30-13.

White and Titus Dean added six points each for ACS.