ON TO THE FINAL FOUR 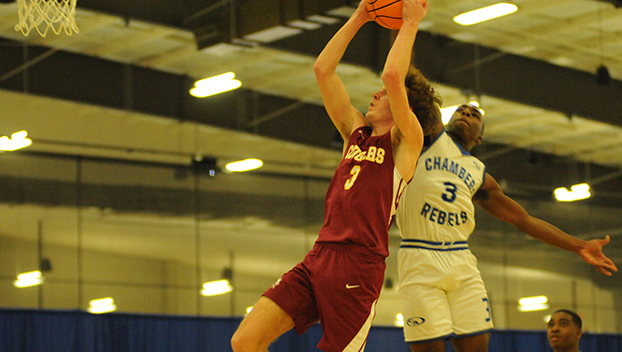 MONTGOMERY – After a hot start, Escambia Academy kept it rolling in a 59-52 victory today over Chambers Academy to earn a berth in the Final Four during an AISA Class 2A Elite 8 contest at the Cramton Bowl’s Multiplex.

The Canoe School went ahead 5-1 in the first period an never gave up the lead from there, leading 15-9 going into the second period, 32-21 at halftime – despite being in some foul trouble – and 45-33 after the third period. No. 3 Chambers bounced back in the fourth on a hot hand, but the Cougars prevailed late with some key buckets down the stretch.

“We got out to a great start,” EA coach Willie White Jr. said. “We got in foul trouble, had to move some starters out and got some subs in the game. We practice that so they know what to do.

“The subs came on well, and we were able to hold on even though we made some mistakes,” he said. “That’s part of it. It’s a pressure game. We got the win, and that’s what’s important right now.”

With the victory, the Cougars advance to the state semifinals, where they’ll face Edgewood this Thurs., Feb. 11, at 4:30 p.m.

Leading 45-33 after the third period, EA kept the scoring going with a Sims 3-pointer to put the Cougars up big. Helton added a layup a short time later.

The Rebels, who suffered its second loss of the season with the defeat, bounced back in dramatic fashion in the fourth thanks to the hot hand of Josh Holliday. Holliday, who led CA with 22 points, scored 16 points in the final period of the contest to keep the Cougars honest.

While Holliday was the hot hand in the fourth for CA, Escambia Academy made it a priority to defend Payton Allen, the Rebels’ leading scorer.

Allen, who finished with eight points on the day, was held scoreless in the fourth and fouled out.

Chambers Academy’s Noah Freeman hit a free throw, and then Holliday swished another 3-pointer to cut EA’s lead to 51-44 with 3:25 to go. Holliday then got a steal, and more than a minute later, converted three free throws.

The Cougars led 55-47 with less than a minute left, but Holliday converted a 3-pointer to cut it to five, and after an EA traveling call, the Rebels took advantage with a Freeman layup to bring it within three.

However, EA spurted off four quick points and held court.

“We knew that coming in we had to really focus on their No. 10 (Allen),” McGhee said. “We knew we had to limit him. We just had to play a clean game, which we did in the first half.”

McGhee said with Bubba Nettles in foul trouble in the second half, Sims and himself took care of distributing the ball.

Early in the third period, Nettles found Sims for a bucket. Nettles then picked up his fourth foul, but EA held a 34-27 advantage.

Hanes got a turnaround jumper to make it 36-28, and Helton sunk a 3-pointer for a 39-28 lead. Helton then converted a drive on the baseline and a layup off transition to go ahead 43-30.

McGhee then hit a layup to finish the third.

“I think we played a good game,” Helton said. “We startred off hot from the 3-point line. In the second half we started slacking a bit. We had to start swapping some people out and we just kept playing well.”

White said the boys handled the foul trouble adversity well during the second half, and reminded them that it’s more important to be on the floor scoring rather than getting into foul trouble.

In the first period, Sims got the game going on a drive to the paint, and later got a field goal off a rebound for a 7-1 lead. McGhee hit a 3-pointer earlier to make it 5-0.

Nettles began the second period with a 3-poniter, and McGhee hit another from the arch.

Defensively, the Cougars put together a good game plan, limiting shots by the Rebels and grabbing rebounds.

For the game, EA shot 53 percent from the field, and made 57 percent of its 3-pointers.

Nettles contribued in the win with five points and four assists.