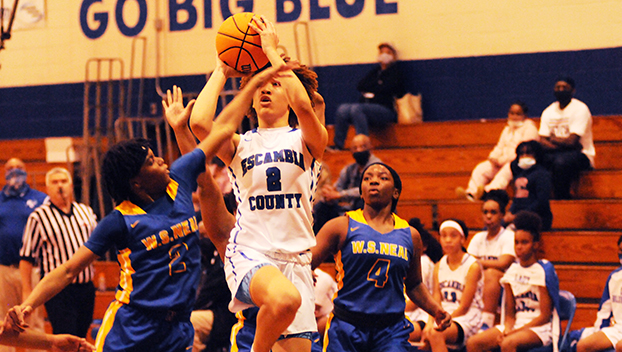 Escambia County went on a 14-0 run in the third period and the Lady Blue Devils held off a late rally to beat W.S. Neal 50-44 tonight in a play-in game of the Class 4A, Area 1 tournament in Atmore.

W.S. Neal’s Jasmine McKinney got a block on the defensive end, and the Lady Blue Eagles ended the run off a free throw.

Betts got a jumper a short time later to make it 39-21, a lead ECHS held going into the fourth period.

“I think we started the game off slow and we ended off slow,” ECHS coach Kasuan Bullard said. “Our best quarter by far was the third quarter. If we start off playing like we did in the third quarter, we put this game away early.”

Bullard said the girls didn’t convert on guaranteed points, including free throws early. ECHS and WSN were tied 10-10 after the first period.

“For whatever reason we weren’t focused,” he said. “That’s my fault. I take responsibility for that.”

Escambia County’s Keturah Johnson began the fourth on a long field goal try, and McKinney answered with a layup of her own.

McKinney added a rebound and putback, and Adams hit a layup off a steal to cut Escambia County’s lead to eight at 44-36.

Betts hit a pull-up 3-pointer to keep a good cushion, however. W.S. Neal answered on its next possession.

Timia James hit a free throw for ECHS, and Adams made two free shots of her own and the Lady Blue Devils held at the wire for the win.

With this victory, ECHS improves to 10-10 on the season, and will travel to Williamson today for the area tournament semifinals. WSN finishes its season.

Even though W.S. Neal ended its season, the Lady Blue Eagles didn’t play like they were done. Throughout the game, WSN didn’t quit, coach Darryl Free said.

“That’s been one thing we’ve been trying to preach, to get them to buy into is that you play until the last buzzer and then you look up and see what happened,” Free said. “There are going to be ups and downs in every basketball game. You got to fight through those downs, and it’s a game of runs. We were able to catch a run at the end. Unfortunately, it wasn’t enough.”

Adams contributed with 10 points for ECHS.