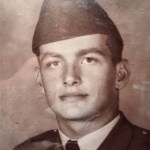 He was born on March 17, 1950. He served in The United States Army during the Vietnam War and was a recipient of the Purple Heart. He was the former police chief of Florala and Sipsey, and served many years in law enforcement.

He is preceded in death by his parents, Charlie and Lois Rushing; his sister, Jean Brown and his brother, Eddie Rushing.