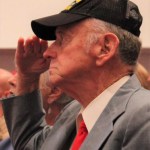 He was born on July 16, 1935 in Atmore to the late Henry Watterson and Ruby Bell Stanley. He was a Vietnam Veteran who served in the United States Air Force for 12 years. He retired after 23 years with the Civil Service as assistant fire chief serving at Saufley Field, Pensacola Naval Air Station and Subic Bay, Philippines where he was crash leader over the air field units. He was commander for seven years with Billy Glenn Rushing Post 90 of the American Legion.

He is preceded in death by his parents; his sister, Gertrude Childress; and his brother, Cecil Stanley.

A funeral service was held on Feb. 18, 2021 at First Assembly of God Church in Atmore with Bro. Don Davis officiating. Interment will be held at Alabama State Veterans Memorial Cemetery with Military Honors in Spanish Fort at a later date.