Mrs. Cheri Denise Carnley, 62, of Uriah, formerly of Anniston, answered the master’s call on March 11, 2021 at her residence. 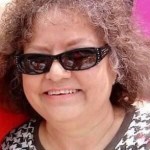 Those whom she joins in that eternal home are her parents, James Elbert and Barbara Patricia Sellers; and her grandparents, Denise Francis Callahan, Madeline Gertrude Mederm Orr, Harrison Sellers and Rhoda McKeechan.

Memorial service will be held at a later date in Heflin with Turner Funeral Chapel in Atmore in charge of arrangements.