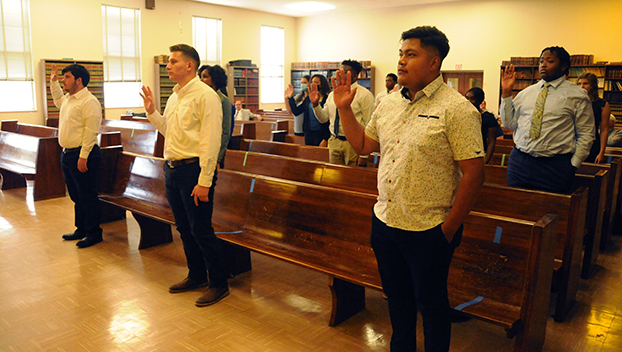 Fourteen seniors participated as jurors today in the first official jury trial since the Alabama Supreme Court suspended trials because of the pandemic more than a year ago.

The seniors from Escambia County, Escambia Academy, Atmore Christian School and homekids and company were a part of the annual Law Day program held at the Escambia County Courthouse.

Law Day was established in 1958 to celebrate the role of law in society and the legal system. President Dwight D. Eisenhower established the annual celebration.

The theme of this year’s Law Day is “Advancing the Rule of Law Now.”

Before the jurors heard evidence presented by the State of Alabama and the defense, Circuit Judge Bradley Byrne, who is retired, spoke about the current drug crisis.

Byrne spoke about the pain and regret people go through because of drug addiction.

“No one plans on becoming addicted to drugs,” Byrne said.

Byrne said one in seven Americans suffer from some sort of drug addiction. He said drug addiction alters the brain, and the only vaccination against drug addiciton is education.

“Educate yourself about addiction,” he said. “Then, make good decisions and cherish your life.”

Alabama State Bar President Bob Methvin Jr. spoke to the seniors about the state bar’s role in the legal system.

He said the state bar is made up of every lawyer in the state, and the bar handles admissions via the bar exam.

Methvin said the bar also looks at lawyers’ character and fitness, and disciplines lawyers if needed.

“We work with the supreme court to make sure the courts work smoothly,” he said.

Methvin said the Escambia County Law Day celebration is widely considered the best in the state, and is recognized on a national level.

“In 40 years, there have been more than 20,000 high school student who have participated in the program,” Methvin said. “When others try to model their Law Day programs, they come here.”

Retirement Systems of Alabama General Counsel Leura Canary talked about what the role of law has to do with everyone.

She said to her, the rule of law embodies several principles, including an agreement and laws being applied equally.

“We have certain inaliable rights,” she said, adding that a trip to the store for some milk has itself rules of law.

There are certain regulations manufacturers have to abide by in producing the milk, she said.

And as one drives to the store, laws must be followed on roadways, she said.

For the jury trial itself, the jurors sat in the general gallery area to maintain social distancing. Additionally, the program, which was held May 6-7, was streamed live via YouTube.

Circuit Judge Todd Stearns presided over the case, which included the State of Alabama vs. Buford Lowery.

Joe Whitt was the prosecuting attorney, and Earnie White was the attorney for the defendant.

Stearns laid out the trial outline, including each side presenting their cases, opening statements, witnesses, evidence, closing statements, jury deliberations and the reading of the verdict.

Lowery was arrested on Nov. 5, 2020, and charged with driving under the influence of alcohol, having an open container inside of his vehicle and failure to wear a seat belt.

The jury found Lowery guilty on all three charges.