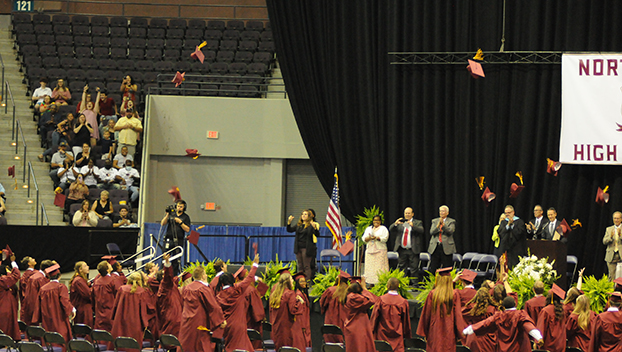 PENSACOLA, Fla. – “Class of 2021 — I believe in every single one of you. You all have so much potential to achieve great things.”

That’s what Northview Valedictorian Amber Gilman said during her address at graduation exercises today at the Bay Center.

Ninety-two turned from one side to the other at the annual event, which marks the end of one chapter and the beginning of another.

“Know that I’m proud of you,” Gilman said. “You have overcome so much and worked so hard. As you go out in the world, never forget these words — I believe in you.”

Gilman said being named valedictorian was a goal of hers since the second grade.

In fact, her achieving the goal came into jeopardy due to an illness last year.

“About a year ago, I was to the point where doctors told me they couldn’t’ find what was wrong,” Gilman said. “I was in the hopsital with the worse case scenario that I might not make it. After much prayer, the doctors found what was wrong in time.”

Gilman said she made a couple of Bs during her junior year, but kept pushing herself.

“Today all of that has paide off,” she said.

Gilman said she is using her testimony to share words of wisdom.

“I know what each of you have experienced,” she said. “We have finally made it.

“There are going to be obstacles. No matter what, you have to keep pushing forward,” she said. “This world isn’t easy.”

Gilman encouraged her classmates to keep their eyes focused on their world and dreams, and to not let anything stand in their way.

Salutatorian Libby Pugh encouraged the class of 2021 to cherish their memories of school.

Pugh said she remembers when the class walked through the doors at NHS as freshmen.

“Four years ago we walked in the doors of Northview High School nervous of what the day would behold,” she said. “Now, four years later, we are leaving this school behind with memories, friendships and knowledge that we’d never imagine we’d gain because of this experience.”

Pugh said their moment in high school has come to an end, and each of them will go through their 92 separate journeys of life.

“Hold on a little tighter, smile a little bigger, cry a little harder, laugh a little louder, forgive a litte more and love a whole lot depper because these are the moments we’ll remember,” she said.