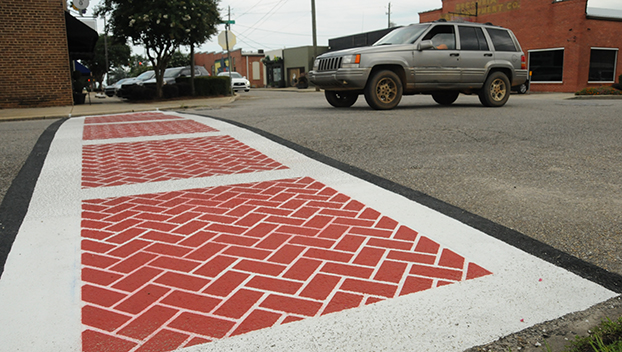 The crosswalks being painted at the intersection of Ridgeley and Trammell Streets are coming along.

About a year ago, a grant was applied for through Alabama Pro Health, the Auburn Extension Service and Centers for Disease Control, according to Pepsi Bottling Co. of Atmore’s Facebook page.

The grant was awarded and Landis Design Co., along with Destany Morris of Philanthropic Seed, a Main Street Atmore committee and other stakeholders, came up with the design.

Landis Design Co. Owner Dave Landis said once the grant was approved, then it was a matter of coming up with designs.

“All kinds of designs were thrown around,” Landis said. “There’s a lot of stuff on the Internet as far as ideas. We looked around and found some patterns we thought would work well.

“We put everything together at Landis Design and got the final pattern,” he said.

Landis said street-marking paint is being used to create the crosswalk.

“It is all painted on and sprayed as well,” he said.

Landis said they got washed out on Monday, but will be back later this week to finish the crosswalks.

He said the finished product will be sometime next week because of the weather.

Landis said there is talk of work on other crosswalks in Atmore, but there are no definite plans at this point.

He added that the crosswalks they are working on now wouldn’t have come to fruition without support from the grant and others.