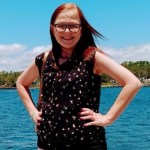 She is preceded in death by her grandmothers, Joyce Fralick Benefield and Leila Parker; her father, David Holland; her aunt, Donna Peebles; and her cousin, Jarrod Peebles.