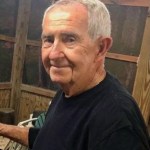 He was born on April 12, 1932 in Frisco City, AL and was raised in Monroeville, AL. He was the son of Ernest Elmore and Mazie Broughton Nicholas.

He is preceded in death by his parents; and his siblings, James Nicholas, Dr. Francis Nicholas and Joyce Nicholas Williamson.

Graveside service was held on July 26, 2021 at Oak Hill Cemetery in Atmore with the Rev. Andy Gartman officiating.