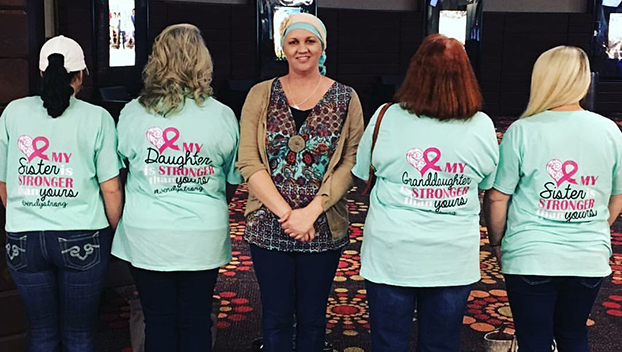 Shown is Wendy Shelton (center) with a group of her family wearing shirts showing support for her during her battle with breast cancer. | Submitted photo

Five years ago, Wendy Shelton beat breast cancer through early detection, treatment and with the help of family and friends.

Shelton, a native of Flomaton, said she had her first mammogram at 39 years old and all things were normal.

“About six or seven months later, I found a lump just accidentally,” Shelton said. “I was thinking that it wasn’t a big deal, but I went back to my doctor and he said it was probably fine, but told me, ‘I’m going to send you back over to have another mammogram and ultrasound.’”

Shelton said her sister in law came with her to the screening, and in hind sight, she was glad she wasn’t alone.

“The day I had my test they told me right then that this looks like cancer,” she said, adding that the doctors sent her over to a surgery cancer center.

Shelton said the lump turned out to be BRCA1 positive. According to the National Cancer Institute, the BRCA1 and 2 genes produce proteins that help repair damaged DNA. Everyone has two copies of each of the genes, one copy inherited from each parent. Additionally, a harmful variant in BRCA1 or BRCA2 can be inherited from either parent.

Shelton said it was a shock to learn that she had the breast cancer and ovarian cancer gene, adding that she was asked if she’d like to have the genetic testing.

“When I got those results and they were positive, it was shocking,” she said. “After that information, they told me I was triple negative. It was stage 2 already when I found it (by self exam). From nothing to six or seven months, I was stage 2. It really was a blessing I caught it when I did. Once I found out I had the gene, then I elected to have a double mastectomy. They told me if I did a lumpectomy, there’d be an 85 percent chance it’ll come back.”

Shelton said she chose to do reconstruction instead, but hit a speed bump because she got staff infection in both of her expanders.

“I had emergency surgery to take it all out and left it out for three or four months,” she said. “They were able to go back in and do the reconstruction.”

After the reconstruction, Shelton said she went ahead and elected to have her ovaries taken out.

Shelton said the breast and ovarian cancer gene can be passed down to her children. She has one son, and added that he’ll be tested when he turns 19.

During her treatment, Shelton said she went through eight rounds of chemotherapy.

“I didn’t have to do radiation,” she said. “My side effects were minimal. They try to treat you for nausia and things when they give you the chemo. It was pretty intimidating when I got to the treatments.”

Shelton said the nurses were dressed head to toe in protective wear as the treatments were pretty toxic.

Shelton said what helped her get through the ordeal were God, family and community.

“I had friends, just people reach out to me, even strangers,” she said. “It was a shock, and I had my moment where I cried in the beginning. I just had this feeling that everything was going to be OK.

“I kept working,” she said. “I was teaching at the time. My doctor told me that at the point I was at, you’re the only patient that I’ve seen keeping working.”

Shelton, who works at Atmore Flower Shop, said October became something personal to her because it does bring an awareness.

“It became personal since I went through it,” she said. “I’m kind of looking into doing the breast cancer walk we’re having for Williams Station Day. I‘ve never participated in anything like that, but I think that would really mean something to me, knowing I made it through and that I’m out there walking for myself and other women.”