Lt. Col. James “Jim” Clifford Eddins, 88, passed away peacefully at his home in Perdido on Oct. 15, 2021, surrounded by family, following a short illness. 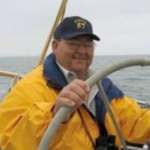 He was born Oct. 11, 1933, in Atmore and eventually moved to and grew up on the family farm just south of town.

Jim passed away only a few days after spending his 88th birthday at his home with friends and family watching football, eating ice cream and cake and enjoying a glass of one of his award-winning Perdido Vineyards wines.

He was preceded in death by his wife of 51 years, Marianne Roman Eddins; his sister, Myrtle Lou Gillespie; his brother, Kenneth Eddins; an adopted sister, Marie Bessett; and his parents, Rachel Steadham Eddins and Clifford Eddins. He is survived by an adopted sister, Jackie Nash; two daughters, Adrienne Hudson and Peyton Hudson; three grandsons, Dorian, Oliver and Sebastian; and numerous nieces, nephews and cousins.

He will be greatly missed and fondly remembered. Jim leaves behind a legacy that will outlive us all.