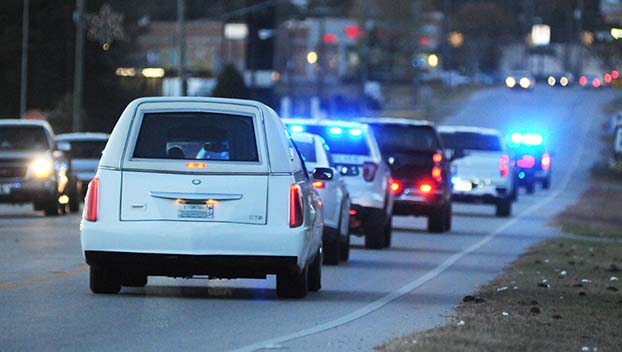 The body of a 78-year-old Alabama lawman who was killed on Wednesday afternoon was escorted through downtown Atmore early this evening en route back to Wilcox County.

Madison “Skip” Nicholson was shot to death late Wednesday afternoon in Wilcox County, according to reports.

According to an AL.com story, gunfire erupted before 5 p.m. in the town of Yellow Bluff, which is about 10 miles outside of Camden.

Wilcox County Sheriff’s Deputy Trenton Gully and Nicholson, a former reserve deputy and constable working as a process server, responded to a residence on a domestic disturbance call, according to AL.com.

Almost immediately, authorities said, the officers were met by gunfire. When it was all over, Nicholson was dead, as was the suspect, 52-year-old Billy Bizzell.

A woman had called 911 to report the suspect had left to go get a gun and was going to return and kill her, Dove said. There were conflicting reports on whether the suspect was her husband or boyfriend.

When the lawmen arrived, they were met with gunfire.

The chief deputy, Dove said, was shot in the arm and transported to a Thomasville hospital. He has since been released from the hospital and is recovering at home.

“He’s still trying to get some rest,’’ Evans said Thursday on AL.com.

Nicholson was shot multiple times in the chest and neck, Dove said. He was airlifted to Sacred Heart Hospital in Pensacola in critical condition where he later died.

Dove said the chief deputy shot and killed the suspect.

Nicholson had long ago retired from his job at a sawmill in Wilcox County, but even when he worked there, he served in public service, first as longtime unpaid reserve deputy for the sheriff’s office, then as a jailer, a constable, and finally as a process server, which Evans hired him to do when he took office in 2011.

The escort left Sacred Heart Hospital in Pensacola, Fla. and then traveled north on Highway 97 into Atmore.