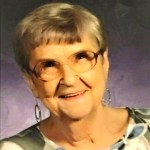 She was born in Cantrall, Ill. on Jan. 25, 1934 to the late Harold Garmers and Harriet Brittin Garmers.

She is preceded in death by her husband, Charles A. Ferguson; two brothers, Robert Garmers and Johnny Garmers; and her granddaughter, Jennifer Ferguson.

She is survived by her children, Lisa Ferguson, Charles D. (Jamie) Ferguson, Gary (Sandy) Ferguson, Timothy (Sue) Ferguson and Christopher (Claudia) Ferguson. She is also survived by one brother, Tom (Sandy) Garmers; one sister, Janet Garmers (Fred) Schmulbach; and many grandchildren and great-grandchildren.

Memorial services will be held Jan. 8, 2022 at 2 p.m. at Brooks Memorial Baptist Church with the Rev. Tim Tew officiating. Inturnment will be at a later date at Joe Hall Cemetery in Athens, Ill.

In lieu of flowers, donations can be made to Brooks Memorial Baptist Church in honor of Mrs. Ferguson.