An Atmore man was arrested on several charges, including attempting to elude a police officer on March 1, according to the Atmore Police Department. 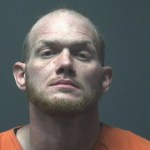 APD Public Information Officer Sgt. Darrell McMann said in a release that Stephen T. McKenzie, 35, of Atmore, was arrested and charged with attempting to elude a police officer, possession of marijuana and using a false identity to obstruct justice.

McMann said at approximately 8 p.m. on March 1, an officer with the APD observed a vehicle run the red light at North Main Street and Ridgeley Street.

McMann said the officer was informed by the dispatcher that the tag number on the vehicle belonged on a different vehicle and the driver’s license number was not on file.

Then, as the first officer and a second officer approached the vehicle to investigate further, McKenzie sped away and ran over one of the officer’s feet, who wasn’t injured, McMann said.
“The officers pursued McKenzie north on Jack Springs Road and then onto Cruit Drive, which is a dead-end street,” McMann said. “McKenzie stopped his vehicle and fled on foot into the woods.”

McMann said the officers set a perimeter and requested assistance from the Alabama Department of Corrections K9 team.

“The K9 team was able find McKenzie a few minutes after they arrived in the bottom of a ditch, and he was taken into custody without any further incident,” he said.